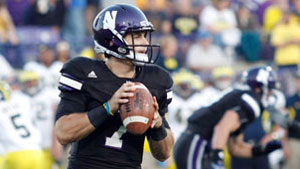 The Northwestern Wildcats have accepted an invitation to play in the Meineke Car Care Bowl of Texas on New Year's Eve at Reliant Stadium in Houston.

The Wildcats (6-6) will square off against Texas A&M (6-6), the third time in the last four years NU has met a representative of the Big 12 Conference in bowl play. It marks the first-ever gridiron meeting between Northwestern and Texas A&M.

The game, now in its sixth year of operation, will kick off at 11 a.m. Dec. 31 in Reliant Stadium, home of the NFL's Houston Texans. National television coverage will be provided by ESPN with the radio broadcast available on WGN720 and WNUR (89.3).

"Everyone associated with Northwestern is thrilled and honored to accept this invitation to play on New Year's Eve in the Meineke Car Care Bowl of Texas," Jim Phillips, NU's athletic director, said.

"Our football program and fans have tremendously enjoyed our recent bowl experiences in Texas so to have the chance to return there and be in a city with as much to offer as Houston is an exciting prospect. Add to that the opportunity to play in a beautiful NFL venue against a program the caliber of Texas A&M and you really have the ideal situation for another memorable bowl season," Phillips added.

Northwestern achieved bowl eligibility for a program-record fifth consecutive year thanks in large part to a four-game winning streak from Oct. 29-Nov. 19.

That run, which was highlighted by a 28-25 upset on the road against No. 9 Nebraska, allowed Northwestern's 2011 senior class to become the winningest five-year senior class in school history, with 36 victories to its credit entering the Meineke Car Care Bowl.

"This is an exciting time for Northwestern football as we head to our fourth consecutive bowl game," said head coach Pat Fitzgerald.

"I'm very proud of the team we'll be bringing to the Meineke Car Care Bowl of Texas, one that is led by a remarkable group of seniors, and we're looking forward to the challenge presented by an outstanding Texas A&M team," Fitzgerald said.

"On top of that," the coach added, "the city of Houston is one that is very important to us from a recruiting standpoint so it will be a great chance to showcase our Northwestern football program."