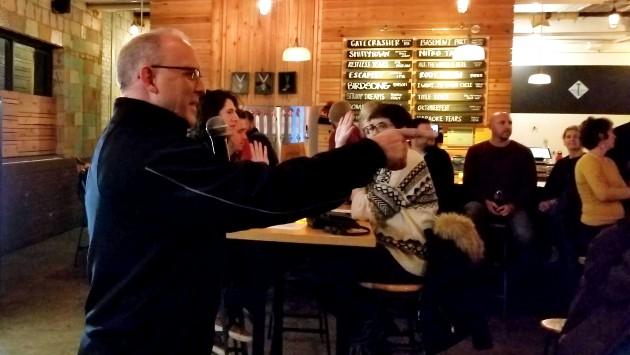 The university, tax exempt under state law since its founding in 1851, currently makes a voluntary $1 million annual payment to the city under a five year agreement that expires next year.

One speaker arguing for more tax payments from the university cited the construction of two buildings for doctor’s offices at the otherwise tax-exempt St. Francis Hospital three decades ago.

He said that to win approval for those structures, the hospital agreed to place them on the tax rolls.

County records show those buildings now are listed with a combined assessed value of nearly $3.8 million.

Hagerty said he plans to meet with university officials to renegotiate the payment in lieu of taxes, or PILOT, agreement. “Perhaps some of what NU is doing is more of a business enterprise,” he said, adding that he anticipated “having a lot of research” done by the time he has the conversations with school leaders.

Tina Paden of 1122 Emerson St. argued that the university should have its own fire department, rather than relying on the city for that service.

“Just giving us an ambulance every few years is not sufficient,” Paden said. She also argued against having Evanston police assist NU police.

The mayor replied that the city is now reimbursed for all details city officers work at NU events.

Bennett Johnson, Trisha Connolly and Misty Witenberg were among those who spoke at the town hall.

Most speakers at the event were familiar to the mayor from their frequent appearances during public comment sessions at City Council meetings.

Clare Kelly of 823 Colfax St. claimed that the Welsh-Ryan Arena special events plan approved by the City Council this week would “be a disaster.”

But Hagerty argued the Out of Space concerts at Canal Shores have proved popular with residents and the NU events could too. “I disagree when people say we’re not getting anything” from the zoning change for NU sports complex.

Hagerty argued that the new center will be a great asset for the city and has drawn private financial contributions from over 1,200 people who have pledged over $12 million.

He conceded that the new center will lose money, but said it will lose less money that the old Crown Center and argued that all communities lose money on their parks and rec programs. “It’s a benefit for all of us” to have the facilities available, he said.