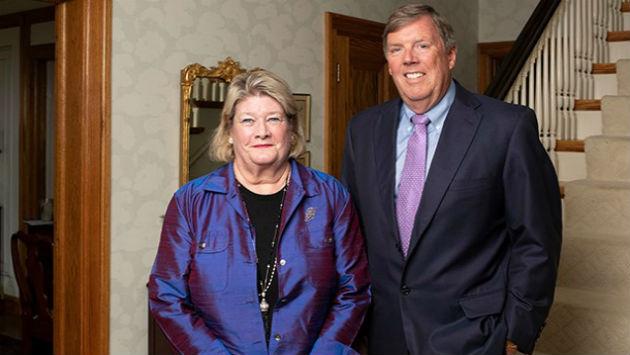 Northwestern University this morning announced it’s raised the fundraising goal for its “We Will” campaign to $5 billion from the original $3.75 billion target.

The change comes as the university announced it had surpassed its original goal for 2020 two years ahead of schedule.

The “We Will” Campaign was launched publicly in March 2014 with the joint goals of raising $3.75 billion from at least 141,000 supporters. It now has received givts from 149,094 Northwestern alumni, parents and friends.

“I am immensely grateful to Bon and Holly, who epitomize the Northwestern spirit through their long-time generosity and volunteerism, and to so many others who have helped us get where we are today,” Northwestern President Morton Schapiro said. “Their generosity has enabled us to reach our goals faster than we ever imagined — and raised our expectations for the future of the University.”

“We are calling on the Northwestern community to continue supporting critically important initiatives that will help the University achieve new levels of excellence,” Northwestern Provost Jonathan Holloway said.

“Among those strategic priorities are endowing financial aid support for undergraduate, graduate and professional school students; expanding our expertise and curricular offerings in global studies and the humanities; broadening and deepening our interdisciplinary research and innovation in computer science; updating the University Libraries facilities; and ensuring that our unprecedented rise in biomedical research funding can continue.”

NU says the campaign has enabled:

Since the campaign began, Northwestern has

Bon French is a member of the “We Will” Campaign Steering Committee and will serve as co-chair of the Campaign in 2019, leading a network of more than 660 U.S. and international Campaign volunteers.

A member of Northwestern’s Board of Trustees since 2004, he currently chairs its investments committee and is a member of its executive and innovation and entrepreneurship committees.

He also has chaired several of his class reunions, has been a guest lecturer and adviser, and is a member of the Kellogg Global Advisory Board and the Kellogg Finance Network. He was the 2011 recipient of the Schaffner Award, which honors Kellogg leaders who have made significant contributions to society and have exemplified Kellogg’s dynamic culture through their professional achievements.

The Frenches’ gift — a transformational bequest commitment — will benefit Kellogg and University programs.

“Bon and I have been thrilled to be a part of the impact the Campaign has had across Kellogg and the University, and we look forward to growing that impact,” said Holly French, a longtime volunteer for Northwestern Medicine’s Marianjoy Rehabilitation Hospital and the Northwestern University Women’s Board. “We hope others will join us in ensuring an even brighter future for Northwestern and its students.”

With 37 years of continuous giving to the University, the Frenches are “platinum” level in NU Loyal, the society recognizing consistent giving to Northwestern. They are also members of the Henry and Emma Rogers Society, honoring those who have included Northwestern in their estate plans.

Past gifts have supported Kellogg, Weinberg College, Athletics and Recreation, the Northwestern University Transportation Center and other areas of the University. The French Quarter within the Kellogg Global Hub, the Bon and Holly French Swimming Scholarship and a number of other funds are named in their honor.

After graduating from Kellogg, French began his decades-long career in the investment sector. In 1980, he joined Chicago-based Adams Street Partners LLC, where he went on to serve as CEO and chief investment officer. Under French’s leadership, Adams Street Partners grew to be one of the largest private equity firms globally — with 10 locations worldwide — and was inducted into the Private Equity Hall of Fame. French is now the firm’s chairman.