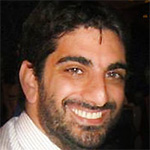 The David and Lucile Packard Foundation has recognized Northwestern University researcher Elad Harel as one of the nation’s most innovative young scientists and awarded him a 2013 Packard Fellowship for Science and Engineering.

In the past seven years, six Northwestern researchers have received a Packard Fellowship.

Harel, an assistant professor of chemistry in the Weinberg College of Arts and Sciences at Northwestern, is one of 16 science and engineering researchers nationwide named a 2013 Packard Fellow. The fellows will each receive an unrestricted grant of $875,000 over five years to pursue innovative research.

Harel plans to use the award to develop and build optical analogs of MRI technology to better understand the misfolding of proteins. Misfolding is responsible for a host of diseases such as Alzheimer’s, Parkinson’s and diabetes.

“This fellowship is a fantastic opportunity that will allow my lab at Northwestern to take on high-risk, high-reward initiatives and develop tools that allow researchers to watch proteins fold in real time, which is one the most challenging problems facing the field of biophysics,” Harel said.

This work may have important implications for developing drugs that target specific regions of proteins at critical times during the folding process.

Through the fellowship funds, Northwestern graduate students working in Harel’s lab will also have the opportunity to see innovative ideas come full circle — from conception to implementation — and be heavily involved in developing new techniques in spectroscopy and imaging and applying them to problems of biological and chemical importance.

The Packard Fellowships for Science and Engineering, established in 1988, is among the nation’s largest nongovernmental programs designed to seek out and reward the pursuit of scientific discovery with “no strings attached” support.

David Packard, co-founder of the Hewlett-Packard Company, was the inspiration behind the program. Packard recognized that the success of his company was derived in large measure from the research and development in university laboratories.

“The Packard Foundation believes deeply in the power of science and engineering research and is delighted to support these creative, young scientists,” said Lynn Orr, Keleen and Carlton Beal Professor at Stanford University, and chairman of the Packard Fellowships Advisory Panel. “Their independent, exploratory research will generate new knowledge, spark fresh thinking and produce ideas that can improve the human condition.”