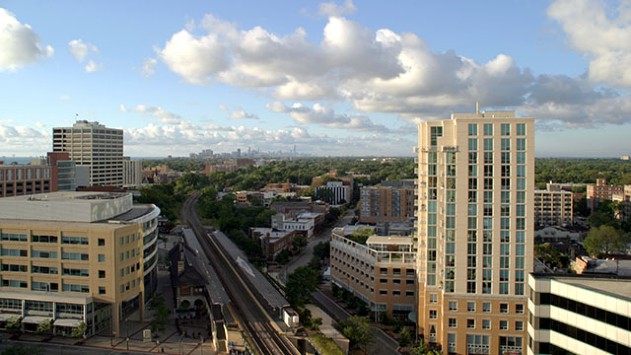 A view of downtown Evanston looking south toward Chicago.

The City of Evanston and Northwestern University announced today that NU will contribute $1 million to the city for a sixth year and also create a new $500,000 Community Engagement Grant Program aimed at working with Evanston and Chicago to advance racial equity and social justice.

The city and the university have agreed that the new fund will invest this year’s $1 million gift in programs that dismantle systemic barriers faced by historically marginalized communities in Evanston.

The new $500,000 Racial Equity and Community Partnership Grant pilot program will be administered by the Office of Neighborhood and Community Relations at Northwestern. Grants will be awarded to partnerships between community-based nonprofits or groups in Evanston and Chicago, and Northwestern faculty, students or staff.

The new fund and community grants are part of the commitment President Schapiro and senior University leaders announced June 14 to allocate $1.5 million in the fiscal year starting Sept. 1 to Evanston and Chicago to advance social justice and racial equity.

This plan shifts the focus of Northwestern’s Good Neighbor Fund program that has provided $1 million a year to the City of Evanston for programs, positions and infrastructure projects in the city in each of the last five years.

Similar to the initial Good Neighbor Fund, allocation of the Good Neighbor Racial Equity Fund will be agreed upon jointly by Evanston’s mayor and Northwestern’s President.

“As Northwestern’s Evanston and Chicago homes continue to grapple with two historic challenges, COVID-19 and systemic racism, the University is in a position to help lead the way in finding a solution, and it has a duty to do so,” Schapiro said. “As part of our efforts to strengthen our communities, Northwestern is increasing our commitments in Evanston and Chicago.”

“Advancing racial equity and eliminating the social and economic disparities that have been present in our city for decades require a communitywide commitment,” Hagerty said. “The Good Neighbor Racial Equity Fund will allow the City of Evanston to build on our efforts to eradicate systemic racism, remove barriers for marginalized communities, and further invest in programs that uplift our entire City. I want to thank Northwestern for partnering with us in this critical work.”

Dave Davis, executive director of the University’s Office of Neighborhood and Community Relations, said Northwestern’s sixth annual donation of $1 million to the city will go this coming year to help Evanston improve outcomes for people of color in four priority areas.

“At this historic moment in our nation, as Americans across the country fight to ensure that Black Lives Matter, these priority areas are focused around measurable community indicators and a racial equity-driven policy process that centers the experiences and voices of those who are most affected,” Davis said. Specific allocations will be determined this fall, and Davis listed the four priority areas, determined in collaboration with the city, as:

In addition to the annual donation, the University is increasing its commitment by creating the $500,000 Northwestern Racial Equity and Community Partnership Grant involving collaborations between Northwestern community members and groups in Evanston and Chicago. These partnerships will pilot ideas and programs that could advance research-based knowledge, address local issues and be leveraged for broader impact by securing additional foundation and government support.

These community engagement grants will add new initiatives to a number of university and community partnerships that are already helping Evanston school children and small businesses – projects that exemplify these types of deep commitments that advance Northwestern’s mission while also moving the needle on some of the most critical community issues.

This Racial Equity and Community Partnership Grant will include:

In September and October, the advisory committee will meet to determine funding priorities, guidelines, and a calendar of next steps, as well as develop mechanisms to facilitate Northwestern faculty, student and staff connections with community-based nonprofits and groups.

A grant website will be launched in November, when officials will announce funding priorities and make applications available. These applications will be due by January, when the committee will review them and recommend to senior leadership which ones should be awarded funding.

More information on the process, the guidelines for applying and other details will be announced in the fall.