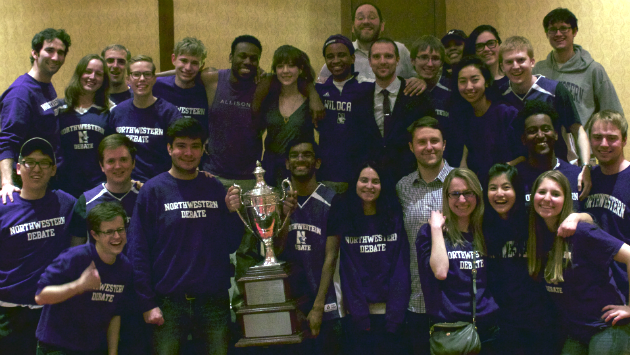 Northwestern won the title by beating debaters from the University of Michigan by a score of 3-2 in the final round.

Northwestern, already the longest-running continuous and “winningest” team in the nation, was led by seniors Arjun Vellayappan and Alex Miles.

For the second straight year, the duo brought home the coveted Rex Copeland Award, the prize for the team with the best record entering the tournament. Only one other team in National Debate Tournament history has won the Copeland award twice.

A second Northwestern team, juniors Connor O'Brien and Robel Worku, reached the eighth round of the tournament.

“Debate has been a central activity at Northwestern since 1856, one year after the induction of the University’s first class of students,” said Barbara O’Keefe, dean of the School of Communication, which funds and administers the Northwestern Debate Society. “We’re very proud of the achievements of Arjun, Alex and the many other team members who contributed to their success.”

About 180 teams competed in the tournament, but none come close to matching Northwestern’s storied tradition. Northwestern’s nearest competitors, Harvard University and Dartmouth College, have both won six titles each.

Debaters participate in “policy debate,” a two-on-two format that focuses principally on questions of public policy. Students “switch-sides,” meaning that in a typical tournament with eight preliminary debates, each team is assigned to debate on the “affirmative” four times and on the “negative” four times.

The format is used to teach argument skills, not ideology. Accordingly, students learn to defend some positions they may personally agree with and some with which they differ.

Northwestern’s championship was the second for head coach Daniel Fitzmier, a senior lecturer in the School of Communication.

As the coach of the Copeland Award-winning team, Fitzmier also takes home the James John Unger Prize for the fourth time. During the course of his career, his teams have reached the finals of the National Debate Tournament 10 times.

Andrea Reed, a lecturer in the department of Communication Studies and the associate director for the Northwestern Debate Society, several alumni of the program and a full complement of up-and-coming student debaters also provided critical support for the team.

The 2014-15 season started on a high note last fall with Vellayappan and Miles, both students in the Weinberg College of Arts and Sciences, capturing the Harvard Debate Tournament for the fifth consecutive year. “It’s one of those unlikely-to-be-broken type records,” Fitzmier said.

Vellayappan and Miles also won the Wake Forest University Tournament in November without losing a single debate. It was the fourth consecutive win at Wake Forest for Vellayappan, a feat so remarkable that it sparked a serious movement to rename the trophy in his honor. “These are Michael Jordan-esque numbers in the debate world,” Fitzmier said.