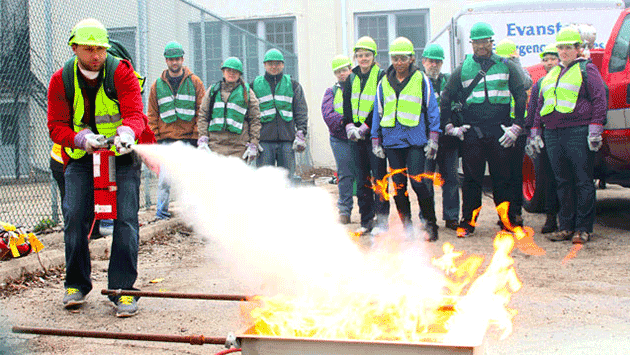 Northwestern University has completed the training of the first class of 24 student, staff and faculty volunteers in Evanston in its newly created Community Emergency Response Team (CERT) program to assist in campus and community crises.

On May 1, CERT trainers put the volunteers through their final training exercise to practice simulated emergencies, including search-and-rescue operations in adverse conditions, moving and bracing debris to extricate trapped victims and extinguishing fires.

Officials from Evanston Fire & Life Safety Services led the exercise with assistance from University Police. Then the class officially graduated to become one of the first active CERT programs on a university campus in Illinois. Each volunteer earned a certificate from the Federal Emergency Management Institute.

“It’s been a very valuable program for us,” said Evanston Fire Division Chief Tom Janetske, who oversaw the final exercise and brought a number of his officers to assist in the training of Northwestern’s volunteers.

Janetske, who serves as Evanston’s emergency preparedness manager, noted that the city has had a CERT program since 2004 with citizen volunteers who have come out day and night to assist police and fire officials in a variety of emergency support roles.

“Northwestern’s CERT program will be very valuable to the community, and their contribution to the town-gown partnership will be great,” he said as the group ended a debriefing on the final exercise, which was held in the old Roycemore School building.

“Did you feel tested?” asked Joseph Frascati, emergency preparedness manager for UP, who organized the program at Northwestern and was one of the first volunteer trainees as well. A number of the trainees nodded in agreement after going through the final exercise and sharing a dinner of pizza and salad during the debriefing.

In an interview about the program, Frascati observed: “You form these teams and you train them in the hopes that you will never actually need to use them. So understand that our goal is to never be needed, because that means that nothing bad has happened.”

However, in an emergency, CERT volunteers would swing into action in support roles to assist, he said. In addition, there are numerous ways for CERT members to do outreach and contribute to the community besides dealing with emergency situations.

CERT is a national community preparedness program operated under the Federal Emergency Management Agency and the Department of Homeland Security’s Citizen Corps Council. The local volunteer program being launched at Northwestern University is a partnership between the University Police Emergency Services Division and Evanston Fire & Life Safety Services.

The CERT program is a way to involve students and staffers in serving the community and increasing the preparedness of individuals at Northwestern. CERT is designed to improve readiness, help people and serve the community through education, training and volunteer service.

“Throughout the country, states, counties and local jurisdictions, including Evanston, have developed and implemented CERT programs to enhance emergency preparedness and increase community education, awareness and outreach,” Frascati said.

“CERT programs operate within the community like good Samaritans to provide support to first responders,” Frascati said. “A CERT program is not intended to replace Northwestern University’s response capabilities but rather to serve as an important supplement to them.”

CERT was originally developed and implemented by the Los Angeles City Fire Department in 1985. FEMA recognized the importance of the program and adopted and expanded the CERT program and materials to cover all hazards, from natural disasters to terrorist attacks.

Northwestern is finalizing a memorandum of understanding with the city of Evanston for the University’s CERT program and is registering it with the Illinois Emergency Management Agency.