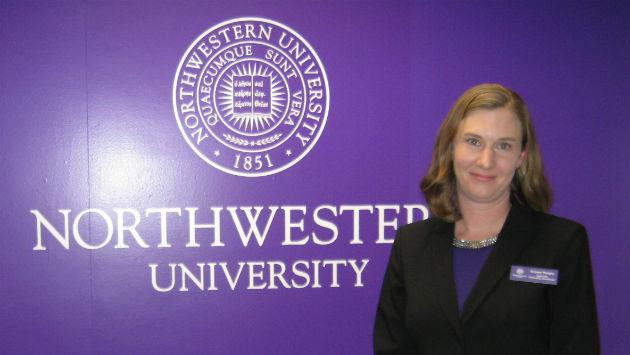 The three-year-old formal collaboration between Northwestern University and the Evanston Township High School has become a national model for university-high school partnerships.

This was the message the ETHS District 202 School Board received Monday night as it reviewed the results of the establishment in 2012 of a fulltime office, adjacent to the superintendent’s office at ETHS, staffed by a Northwestern executive whose job is to facilitate the communication between the university and the high school and to look for activities that will benefit both institutions.

Appearing before the board was Kristen Perkins, the NU representative whose official title at the university is Partnership Coordinator, a position that emerged soon after Morton Schapiro became president of Northwestern.

Perkins explained that the benefits to the university are threefold:

A stronger ETHS makes a stronger Evanston community; the Northwestern faculty and staff have students at ETHS that enables the partnership to help NU attract new faculty; and faculty and students want and need to do outreach as part of federally funded research grants.

As for the high school, the partnership connects two world-class institutions; it widens opportunities for teachers, students, and ETHS families; it provides additional academic and cultural resources; and it enables the high school to more fully participate in federally funded initiatives.

The biggest misconception, according to Perkins, is that it primarily provides a feeder pipeline of students for the university. While it does enhance that advantage, Perkins admitted, that is not a major reason for the affiliation.

She supplemented her appearance with a four-page document that listed 72 examples of partnership activities her office has generated since it was established in September, 2012.

While the primary focus of the collaboration, in the beginning, was in the field of science, technology, engineering, and mathematics (STEM), it has expanded into such areas as college access, arts and culture, ETHS students taking courses at Northwestern, graduate students at the university teaching courses at ETHS, and numerous tutoring and mentoring projects.

One of the primary successes she related was the relationship established between the two institutions in what they refer to as “Women in STEM,” a group that has grown from nine students three years ago at ETHS to more than 140 students today.

The group meets each Friday at lunchtime at the high school and involves visits from a similar group at Northwestern that hopes to encourage more female students to enter the sciences, a field that typically has been a male domain for years.

Following her presentation, board member Jonathan Baum said “This is great stuff. It’s so much more than being good neighbors.”

A new town-gown initiative at ETHS