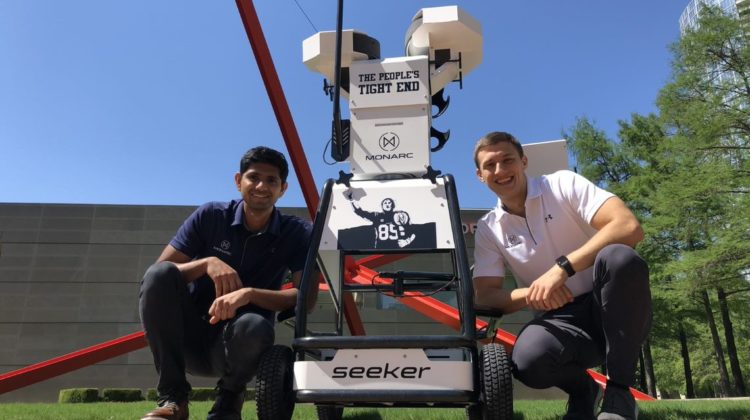 Bhargav Maganti and Igor Karlicic with The Seeker they customized for NFL tight end George Kittle.

The Northwestern Wildcats are getting a new quarterback. Six feet tall, 350 pounds, and pinpoint accuracy with passing. Plus, this QB is mobile … he’s got wheels. Not feet, but real wheels.

The new passer is not some hotshot recruit, nor a grad transfer. This QB is named the Seeker, the world’s first robotic quarterback, and it’s designed by a couple of Northwestern graduates.

The Seeker can fire six footballs, one every nine seconds, to a receiver, either to a specific spot on the field which the receiver chooses, or the Seeker can also be programmed to follow where the receiver is going and zing the ball right on target. Left, right, sideline toe tap, you name it. Take that, Tom Brady!

Developed by 2012 engineering graduates, Bhargav Maganti and Igor Karlicic, the device is already being used by about 20 National Football League receivers and half a dozen NCAA football teams. Northwestern’s Seeker will be delivered this week.

This type of robot “had never been attempted” says Karlicic. He and Maganti started developing their quarterback in 2014, as a side project, while each was working at a different business.

But, Karlicic says, he and Maganti wanted to “pursue this full time.” They founded a company called Monarc, and, thanks to a connection they had with the University of Iowa, they moved to Iowa City in 2016 to refine their prototype and get it onto the practice field.

“The reaction was overwhelming,” Karlicic says. Word spread, and while development and production took awhile, by early 2020, Oklahoma, LSU, SMU and Virginia had joined Iowa as customers.

The Seeker is far more accurate than old-fashioned throwing machines that were almost like a catapult. With the Seeker, a receiver can wear a small device which, according to the developers, tracks the player’s speed, location, acceleration, and anticipates where he is going. The data connects to the Seeker, which computes the route and fires the ball.

But then, enter COVID-19. With all the disruptions to football schedules, you might think the Seeker would have been benched. Actually, it was the opposite. NFL receivers, unable to attend training camp or practice with their teammates, found the robot to be a passer who never got tired, always threw the ball perfectly and was immune to the coronavirus. Using the robot, receivers could perfect their craft without having a quarterback on hand.

“We shifted our direction of target customers,” Maganti says, from colleges to the pros.

George Kittle of the San Francisco 49ers, Mohammed Sanu of the Detroit Lions and Hunter Henry of the Los Angeles Chargers are among pro receivers who sought out the Seeker and are using it. All three also became investors in the project.

But bringing the Seeker home to Northwestern is special for the designers. Both were Wildcat fans when attending NU and Karlicic remembers a pep talk from Coach Pat Fitzgerald to students in their program.

“It’s really cool to be back to interact with Coach Fitz now,” he adds.

Maganti says “it’s exciting to have our alma mater” on board. He says the Seeker, so named because seeks out a receiver, can also be programmed for the speed of the throw, left-or-right-handed quarterback and hang time for a punt, among other parameters.

Monarc even has a high school customer in Tennessee. That’s exciting, the developers say, because they can track performance improvement if this particular athlete continues to college and then the pros.

The Seeker can be painted in school or team colors, with logos, player numbers and other personalized statements. “It’s a huge show of school pride and a powerful recruiting tool,” says Karlicic.

And demand for the Seeker will likely seek higher levels. College football, and the NFL, “are like an arms race,” Karlicic notes. “Everybody wants one.”

And in this arms race, the Seeker’s arms can throw all day.