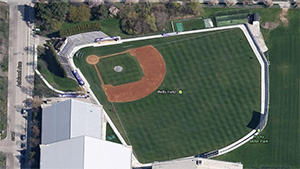 A Google Maps view of Rocky Miller Park at Ashland Avenue and Isabella Street in Evanston.

Roxy Pepper is the daughter of the late NU president Dr. J. Roscoe (Rocky) Miller, for whom the park is named.

“We are grateful to the Peppers for their generosity and for their leadership in challenging others to help fund athletics, including critical renovations of Rocky Miller Park,” Schapiro said in a statement. “The planned improvements will benefit both our student-athletes and our fans, but we need to meet our goal to make it all happen.”

“This challenge is a tremendous opportunity to help our student-athletes succeed at the highest level, and we need to build on the Peppers’ gift,” said Jim Phillips, vice president for athletics and recreation. “Providing our players, coaches and fans with a beautiful, modernized facility will send a strong message about Northwestern’s commitment to the baseball program.”

In recent years, more than half of Big Ten schools have either built or renovated baseball stadiums or have begun fundraising for or construction of stadiums.

In December the school announced plans for a new multi-use athletics and recreational complex on the lakefront.

Baseball first became an organized team sport at Northwestern in the 1870s, making the tradition of Wildcats baseball nearly as old as the game itself. In the last 25 years, 62 Northwestern players have been drafted or signed by a Major League Baseball team.

Richard and Roxy Pepper have been longtime volunteers and benefactors of Northwestern. Both have served as leaders for several alumni organizations and on their class reunion committee. Roxy Pepper also was a member of Northwestern’s Board of Trustees from 1985 to 1989. In 2001, they jointly received Northwestern’s Alumni Medal, the highest honor awarded to alumni of the University.

In 2005, the Peppers made a generous gift to Northwestern’s School of Communication to endow the department of communication sciences and disorders.

Richard and Roxy Pepper also made a significant contribution in 1997 to endow the undergraduate laboratories in civil and environmental engineering and to assist in the renovation of the Technological Institute, the building that houses the McCormick School of Engineering and Applied Science. The civil engineering wing of the Technological Institute was named at that time in honor of the family.

In 1978, the Peppers established the Stanley F. Pepper Chair in Civil Engineering in honor of Richard’s father.