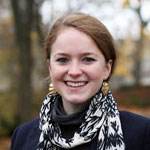 Amazingly fluent in Arabic, after learning it for the first time during college, Smierciak currently lives in Cairo, Egypt, where she works as an educational consultant for FACE for Children in Need.

A triathlete with energy to spare and an intellectual with boundless curiosity, she travels one and a half hours each way to her job located just outside of Cairo, where she works at a makeshift school, supported by the United Nations, on behalf of street children.

She works in the classroom, writes curriculum and works with other teachers in an effort to help students, mostly males, transition into the mainstream educational system and otherwise gain advantages for making a living.

Rhodes Scholars receive full financial support to pursue a degree or degrees at the University of Oxford in the United Kingdom. Smierciak plans to pursue an M. Phil in development studies. She will use the degree to attain the economic expertise and methodological wherewithal to conduct research on development in the Middle East.

Smierciak visited the Middle East twice before moving to Cairo in the summer of 2010 and is committed to promoting development in the region, particularly in the realms of health and education. During the summer of 2010, she studied Arabic at the University of Damascus in Syria through an immersion language grant.

Each year 32 Americans are selected as Rhodes Scholars. They are chosen for outstanding scholarly achievement and leadership potential as well as for their character and commitment to others and the common good.

Smierciak more than fits the bill, according to those who know her best. “Brave,” “fearless,” “unassuming“ and “brilliant,” are among the adjectives commonly used to describe her.

From Lemont, Ill., Smierciak majored in history and in Middle East language and civilization at Northwestern.

She studied with Carl Petry, a professor of history at Northwestern, who is a specialist on the Islamic world and North Africa and medieval and modern Egypt.

Her work also was guided by Henry Bienen, president emeritus of Northwestern, a member of the board of trustees of the Chicago Council on Global Affairs and a political scientist with interests in political and economic development.

And her work was influenced by William Reno, an associate professor of political science who is a specialist in African politics and the politics of collapsing states.

Smierciak earned departmental honors for her thesis on the power relationship between President Gamal Abdel Nasser and the Egyptian communists’ labor mobilization.

The Rhodes Trust is a British charity established to honor the will and bequest of Cecil J. Rhodes.