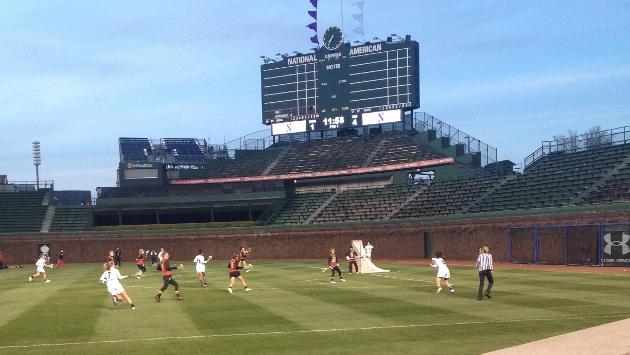 Hundreds of Evanstonians made the journey to Chicago's Wrigley Field Saturday evening to cheer Northwestern University's womens lacrosse team as they soundly defeated the University of Southern California 12-7, braving temperatures in the 40s.

Alumni packed the Captain Morgan Club at Wrigley for a pre-game "tailgate" of hot dogs, hamburgers, beer, and wine, which included a video welcome by lacrosse coach Amonte Hiller and personal remarks by Northwestern President Morton Schapiro, who was a faculty member and dean at USC from 1991 until 2000.

Schapiro lauded USC as "a great school," and then wisecracked, to the partisan crowd's delight, "but I hate 'em now." 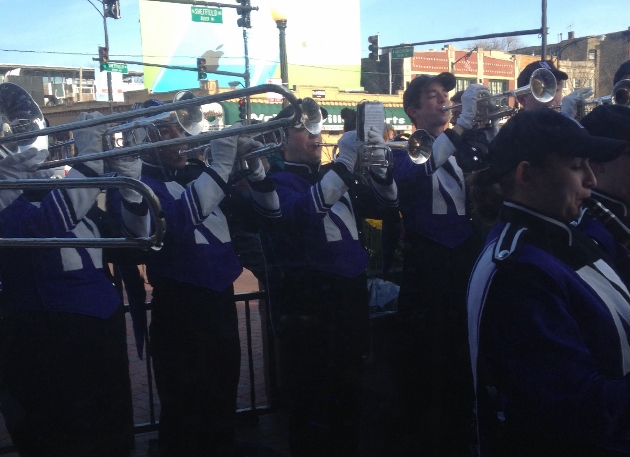 The NU Wildcat Marching Band performing for alumni at a pregame rally.

The pregame event, sponsored by the Northwestern Alumni Association, included a brief performance by the Wildcat Marching Band.

More than 5,000 spectators watched the beginning of the game, but many left at the end of the first period, with Northwestern comfortably in the lead.

The fifth-ranked team snapped a two-game losing streak as it extended its record for the year to 10-5, prompting one local sportscaster to quip that it was good to finally see "a winner at Wrigley."

Top: Brisk on-shore winds from Lake Michigan chilled the players as Northwestern enjoyed a comfortable 4-1 lead in the middle of the first period.