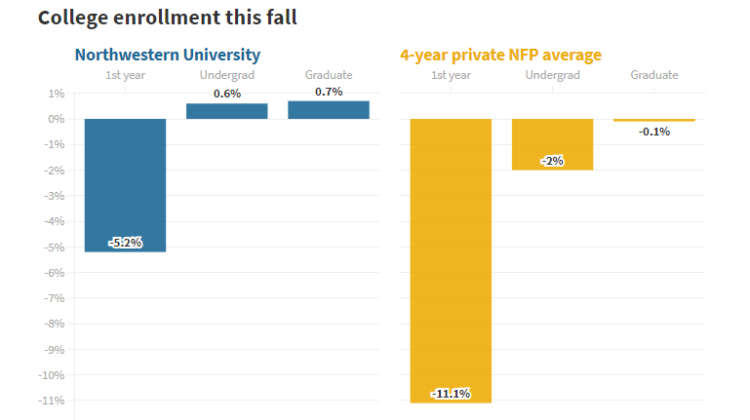 Northwestern University is bucking a nationwide trend of declining college enrollment during the coronavirus pandemic.

The National Student Clearinghouse Research Center, which tracks college data, says undergraduate enrollment nationwide is running 4% below the same time last year, and overall enrollment including graduate school is down 3%.

The picture is worse for private non-profit four year schools than for state schools and private for-profit schools, the research center says.

However, overall enrollment at Northwestern is up, though by just 0.2%

Northwestern has seen a 5.2% decline in first year undergraduate enrollment, to 1,902 students

Most of Northwestern’s classes are being held remotely due to the coronavirus pandemic. The NU numbers do not indicate how many students are in Evanston, as opposed to staying in their home towns and taking e-classes there.

The Clearinghouse study is based on 9.2 million students from the roughly 54 percent of institutions that have reported their data.

Community colleges had the biggest decrease nationwide, a 9.4% drop.

This afternoon the Illinois Community College Board reported that the state’s two-year schools have seen a 13.7% decline in enrollment this fall, dramatically accelerating a trend that had seen those schools suffer enrollment declines averaging 3.7% in each of the preceding four years.