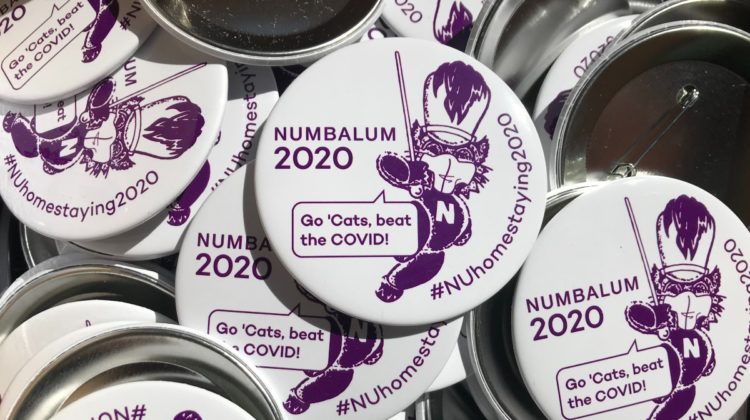 Buttons for the band.

Here is a NUMB idea. Not numb, but NUMB … as in Northwestern University Marching Band.

Because of the coronavirus, fans will not be allowed at Big Ten football games this fall. No bands, and no Homecoming either. So, undaunted, the marching band alumni club, the NUMBALUMS, is organizing a virtual ‘Homestaying” for those who once marched up and down the gridiron at Ryan Field.

“It was important to do something,” says NUMBALUMS president Drew Scott, who played trumpet in the band during his four years at NU (1988-1992). “Homestaying” will be a “small bit of joy in all of this gloom,” he adds.

Band alums who sign up for the event, or sort-of-event, will receive a swag bag, a “packet of weirdness,” as Scott puts it. The bag includes a button (“Go Cats, Beat the COVID”), a mask, purple Kool Aid, and other goodies intended to “strike a blow against this Dumpster fire of a year.” There will also be a virtual tailgate.

Scott says “it’s unfortunate and sad” for seniors in the band, as this year would have been their “last chance to suit up.” The virtual “Homestaying” is October 24, the day of Northwestern’s first game in this covid-delayed season (home, vs. Maryland). Scott says the alumni club is trying to make the virtual tailgate “more than just a bunch of talking heads on a zoom call.” Details TBA.

“Homestaying” will be a “poor substitute for the original, like a diet cola,” Scott says. “But it’ll be better than going thirsty.”

So, band alums, on October 24, raise that can of diet cola, or perhaps enough beer to make you NUMB. And look at it this way. Every marching band at every university has been part of Homecoming for decades. Northwestern’s band alums are the first to have “Homestaying.”

“It’s a way to do something to at least create a smile on the corner of your mouth,” Scott says.