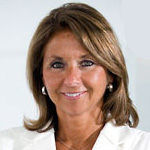 Baglivo has served as CEO of several leading communications agencies and as the global business leader for those agencies’ relationships with multinational companies, including Procter & Gamble, General Mills and MillerCoors.

She took over as CEO of Saatchi & Saatchi’s New York office in 2004 and led a financial, operational and reputational turnaround of that flagship office. She became Chairman and CEO, Americas, for Saatchi in 2009, responsible for the firm’s North American, Latin American and Multicultural offices.

“Mary will bring tremendous insights and extensive experience to Northwestern’s global marketing and branding efforts,” Schapiro said. “I’m very pleased to have her join the leadership of the University, and I look forward to having the benefit of her expertise.”

“I’m very excited to join the Northwestern leadership team and to reapply my experience to help accelerate the success of this great mission-driven University,” Baglivo said.

Baglivo holds a master’s degree in integrated marketing communications from Northwestern’s Medill School of Journalism, Media, Integrated Marketing Communications. She earned her undergraduate degree in English from Rutgers University, which has honored her as one of its distinguished alumni.

Baglivo is married to James Meguerian and has two children. Her son, John Meguerian, graduated from Northwestern in 2012, and her daughter, Martha, is a junior at Tufts University.