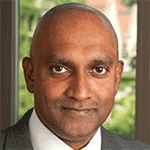 Serving as Northwestern’s chief operating officer, Chinniah will lead all business and finance operations and help shape the University’s global vision and strategy. He will succeed Eugene S. Sunshine, who is retiring after 17 years at the University.

Chinniah will bring a long history of leadership at the highest levels of academia to Northwestern. He joined the University of Chicago in 2007 and was named executive vice president in 2013. His leadership portfolio at Northwestern will be broad in nature and cover a spectrum of administrative and financial areas.

He also will bring a strong resume of service leadership to his role as principal adviser to the president on nonacademic matters.

At the University of Chicago, Chinniah leads the Finance and Administration Division and is responsible for fiscal planning.

The numerous financial and administrative departments that report to him include Facilities Services, Information Technology Services, Transportation and Parking, the University of Chicago Police Department, Internal Audit, Risk Management, the Office of Business Diversity and Commercial Real Estate Operations.

He also actively engages with board of trustees committees at the University of Chicago, as he will at Northwestern.

Besides development of global strategy, his expanded portfolio at Northwestern will include the Office of Human Resources, University Services, the Investment Office and the Office of Change Management.

“We are very excited to have Nim Chinniah join Northwestern,” President Schapiro said. “His steady leadership throughout his academic career, most recently as a chief financial officer at one of the world’s best universities, undoubtedly, will serve Northwestern well in the coming years.”

Chinniah’s service leadership includes serving on the board of the Chicago Children’s Choir and the University of Chicago Charter School’s governing board. Previously, during his tenure at Vanderbilt University, he served as chairman of the Nashville Human Relations Committee, appointed by the mayor of Nashville.

“Nim’s service leadership on community boards and organizations is a key strength that we value highly,” President Schapiro said. “The University is especially committed to connecting with the communities in which it is located and to sharing its expertise.”

Chinniah received the "Rising Star" award in 2003 from the National Association of College and University Business Officers, was named a 2011 Business Leader of Color by Chicago United and was a finalist for the 2011 CFO of the Year Award given by the Chicago chapter of Financial Executives International.