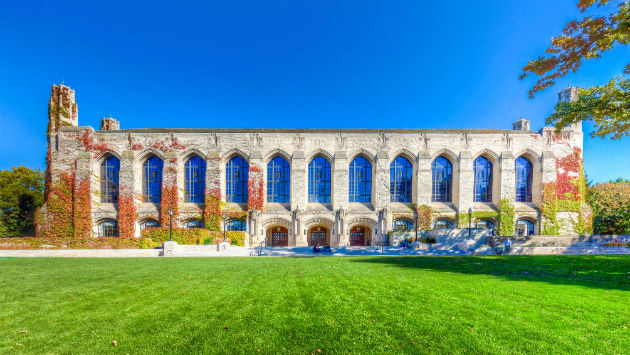 Deering Library on the NU campus.

While some universities around the country will require students to be vaccinated against COVID-19 before returning to campus this fall, Northwestern University has “not made a decision” on that yet.

In an email to the university community, Luke Figora, NU vice-president for operations, says Northwestern will let students, faculty and staff know in the coming weeks if there are any changes.

Notre Dame, Rutgers, Cornell, Brown, and Northeastern, among others, are all requiring students to get their COVID shots before school starts in the fall.

Figora says NU’s “strong desire is to offer vaccinations to all students before the end of the Spring Term.” However, as of now, “we do not have enough supply to make such a commitment.”

Figora says that NU is asking students, faculty, or staff who have been fully vaccinated somewhere other than Northwestern to let the university know the dates, as well as the type of vaccine (Pfizer, Moderna, Johnson and Johnson).

This disclosure is voluntary, but Figora says such disclosure “will be extremely helpful in gauging how many community members have received the vaccine, and how many still need it.” He says this information will help NU advocate for more vaccine.

Northwestern has an onsite clinic, but there are very limited shots available, usually only about 200 to 300 doses a week, Figora says. He says once students become eligible next week, NU will open the clinic to them. However, appointment invitations will be age-based, starting mostly with faculty and staff over age 45.

Next week, Illinois is expanding vaccine eligibility to anyone over 16, however, eligibility does not necessarily mean an immediate appointment. The City of Evanston health department has vaccination events every week, and will begin a pilot program using Blomquist Gymnasium on the NU campus as a precursor to having the gym available for mass vaccination clinics.

Figora notes that many students, faculty and staff may have received their first COVID vaccine dose somewhere else, during spring break. He says while it would be “preferable” for NU to offer the second dose in Evanston, “we are currently unable to offer this option.”

He says the city health department only allocates enough first and second doses to NU for each person who will be vaccinated. Northwestern is “required” to give both doses, and with just a few exceptions, cannot give the second dose only, Figora says.

“Therefore,” he adds, “everyone should plan to receive a second dose at the same location that administered the first dose.”