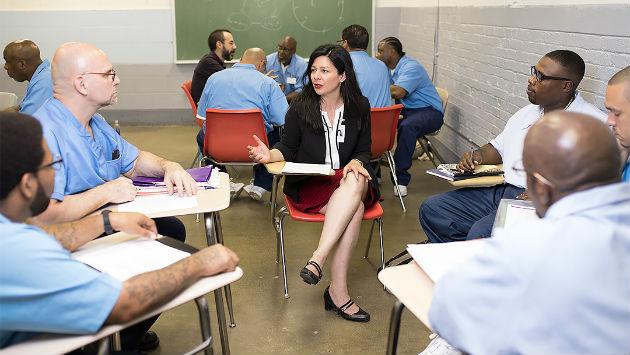 A partnership between Northwestern University and the Illinois Department of Corrections launched a new education program at Stateville Correctional Center this fall that could lead to liberal arts degrees for prisoners.

The Northwestern Prison Education Program is the first program in the state to offer liberal arts courses for college credit – credits prisoners will be able to apply toward an undergraduate degree through the Northwestern School of Professional Studies.

The University has pledged to waive tuition for students accepted into the program, and the corrections department will count completed courses toward sentence reductions for inmates.

The program, which recently accepted its first class of 20 students, is intended to reduce recidivism while extending the benefit of a high-quality education to those behind bars.

“When people say we don’t know how to deal with crime – that’s just false,” said Jennifer Lackey, program director and a professor of philosophy at NU. “We know very well that education is the most effective way to reduce recidivism and offset barriers to reentry into society.”

“The classroom is absolutely transformative for these students,” she said. “They come in identified by cell house and prison ID number, but in here it’s just Robert, just Tyrone. They learn how to develop their own perspectives and how to listen to each other. It’s as vital a community of scholars as we have at Northwestern.”

The state of Illinois already provides a range of educational opportunities in many of its 28 IDOC facilities, but none of them provide incarcerated students the opportunity to obtain a liberal arts degree.

“Education is a critical component of offender rehabilitation,” said IDOC Director John Baldwin. “By providing incarcerated individuals with opportunities to advance their critical thinking skills and earn college credit, we set them up for success when they go home.”

The program is open to all incarcerated men at Stateville who either have earned a high school diploma or passed the General Education Development (GED) exam. Applications include written essays and in-person interviews, which are reviewed by a committee of Northwestern faculty and graduate students.

The inaugural quarter will offer two classes, one taught by sociology professor Mary Pattillo called “The Sociology of Chicago,” which examines research on Chicago through methods such as ethnography and demography. Pattillo will teach the course to 20 students at Stateville, while simultaneously teaching it to incoming freshmen on Northwestern’s Evanston campus.

More than 40 Northwestern professors have expressed interest in teach at Stateville in subsequent quarters.

Research has shown that while two-thirds of formerly incarcerated men will return to prison within three years, participation in a prison education lowers the re-arrest rate by 43 percent.

“These individuals have the will to become educated and make thoughtful contributions to their communities,” Lackey said. “All they need is to be given the chance.”