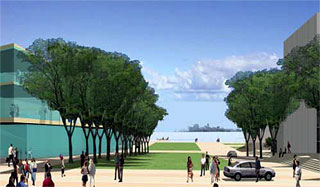 A Northwestern University consultant got a round of applause from about three dozen city residents Thursday night as he ended a presentation of the school’s new 50-year plan for its Evanston campus.

Consultant Ricardo Dumont of Sasaki Associates, which developed the plan in consultation with a committee of university faculty, staff and students, said it seeks to adhere to existing zoning for university-owned land and doesn’t envision expanding the university’s footprint into the city.

The presentation came at a meeting of the NU-City Committee at the Civic Center.

In one of the most prominent of the plan’s many proposals, it calls for creating a new crescent-shaped alignment of buildings on the lakefill campus to mirror a smaller existing crescent of older buildings facing Sheridan Road. 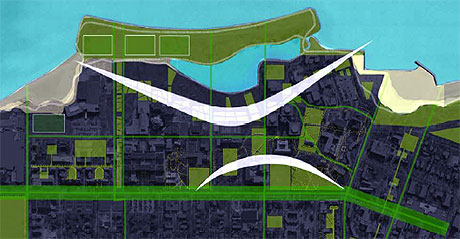 The new crescent is shown at the top of this east-facing image.

To complete the south end of the new cresecent, the school would have to remove an existing parking deck that walls off the southeast corner of campus from the lake. 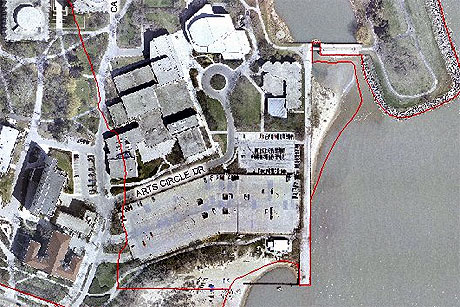 The parking deck, just south of Arts Circle Drive in this north-facing city aerial photo, would be replaced with a more compact parking garage if the provisions of the framework plan were implemented.

That would open up dramatic views of the Chicago skyline in the distance that are now blocked by the parking deck.

In response to a question, Dumont said the school has no intention of closing off access to the lakefront for city residents. He said the plan would actually enhance access by adding new pedestrian corridors to the shore as extensions of the existing walkways from the Foster Street and Noyes Street Purple Line stations.

Robert Atkins, the president of Northwestern Neighbors, which has opposed various university projects in the past, said "it’s praiseworthy" that the plan calls for replacing the Foster-Walker dorm complex, with residential building that would enhance the residential character of that street.

But he suggested building new homes there, rather than moving homes that now face Sheridan Road and are used to house administrative offices.

Judy Fiske, a candidate for 1st Ward alderman, said that under the settlement of a lawsuit between the city and university, the buildings along Sheridan were to be permantly preserved on their current sites.

But she praised plans for replacing the Rebecca Crown administration center with a new mixed-use gateway to the campus. "This is a lovely way to integrate the university and the downtown," she said.

Asked about the future of land now used by Garrett and Seabury Western seminaries, Elizabeth Hitchcock, a facilities planner for the university, said that Garrett’s lease has options that don’t run out until 2138 and Seabury’s runs for more than 100 years.

Jeanne Lindwall, a candidate for mayor and city planner by profession, said she wanted to commend the university for doing a master plan.

She said she’s lived near campus for over 30 years "and it’s always been frustrating, because the univeristy just seemed to plop down buildings on vacant spots."

She praised inclusion of plans for three new parking structures in the plan. "I hope you size them on the generous side," she said. "I think that would alleviate some of the neighborhood parking issues whenever school is in session."

Dave Schoenfeld, a member of the NU-City Committee, suggested trying to increase the percentage of students who live on campus to minimize friction with neighborhood residents.

Ron Nayler, the school’s associate vice-president for facilities management, said about 63 percent of students now live on campus, and there are limits to how much that percentage can be increased.

While freshman tend to want to be on campus, he said, by senior year most students want to live off campus as they start to build lives as independent adults in the community.

Committee members said they hope to schedule another meeting in about two weeks for further discussion of the plan. The university has set up an e-mail address, campusplanning@northwestern.edu, that residents can use to submit comments.