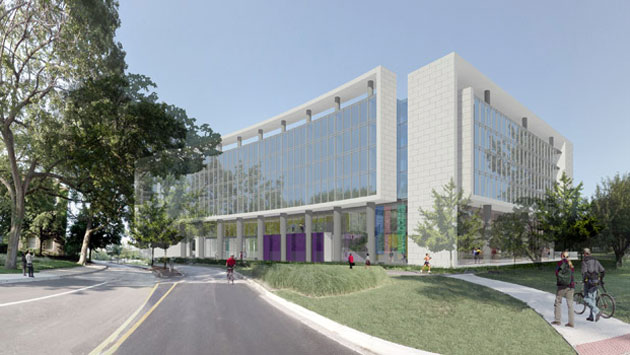 Northwestern University officials announced plans today to construct a new state-of-the-art visitors center for prospective students and their families on its Evanston campus.

An architect's rendering of the new visitors center.

Northwestern University officials announced plans today to construct a new state-of-the-art visitors center for prospective students and their families on its Evanston campus.

The 170,000-gross-square-foot facility, designed by the Chicago architectural firm of Perkins+Will, will include an auditorium with approximately 160 seats, meeting rooms, offices for admissions visitors staff and waiting areas for visitors.

Northwestern also plans to demolish the existing boathouse used by the University’s sailing club and replace it with a larger facility near the new visitors center.

Along with the recently announced $117 million new building for the Bienen School of Music and School of Communication, the new visitors center and boathouse are part of the University’s southeast campus development plan.

The eastern third of an existing two-story parking garage located at the south end of campus will be demolished and replaced with a 120-foot-wide pedestrian-friendly green space that will slope down to Lake Michigan from the new music/communication building and other arts buildings in that area.

The total cost of the southeast campus development projects will be approximately $151 million. The work will generate approximately $2 million in building permit fees for the City of Evanston and is expected to create more than 170 construction and related jobs.

To provide adequate parking for admissions visitors and comply with Evanston zoning requirements, the new visitors center will include a parking garage for about 435 cars. The south and west facades of the garage will be enclosed in glass and stone to help obscure the visibility of the cars in the garage and to continue the facade of the visitors center portion of the structure.

By combining the visitors center and parking garage on the main part of its campus, Northwestern will enable admissions visitors to park in the same building where admissions information sessions are held and campus tours begin.

The information sessions and tours are now held in a building located at 1801 Hinman Ave., at the south edge of Northwestern’s campus. Originally built as an office for a professional association, that building has no parking for visitors and inadequate facilities for information sessions. More than 47,000 people – prospective students and their families – visit Northwestern’s admissions office every year.

“The new visitors center will provide a beautiful new front door for Northwestern and enable us to start campus tours on the main part of campus, rather than having to cross Sheridan Road with large groups of visitors,” said Michael Mills, associate provost for enrollment management. “With a new center located directly on the lakefront, we’ll give visitors a wonderful first impression of Northwestern.”

The parking garage in the visitors center is expected to reduce parking on residential streets in Evanston near campus by admissions visitors, which now occurs.

In addition, because Northwestern’s parking lots and garages do not require a University permit on evenings and weekends, the new garage will be available for use by people going to the adjacent Evanston beach and park during those times. The park is the site of concerts, arts festivals and other activities throughout the summer months, and the beach is one of Evanston’s most popular.

“We’re very pleased to be able to create an attractive new gateway to campus while at the same time reducing parking on city streets and providing additional parking during the evening and weekends,” said Eugene S. Sunshine, senior vice president for business and finance.

The interior buildout of the visitors center will be designed with a minimum goal of LEED CI Silver certification. Additional sustainable features will include a geothermal heat exchange system to heat and cool the garage area and reserved spaces for charging electric cars.

Estimated cost of the new visitors center is $32 million. Construction is expected to begin later this summer and take 18 months with completion slated for early 2014.

A gallery of photos of the planned visitor center is available online. 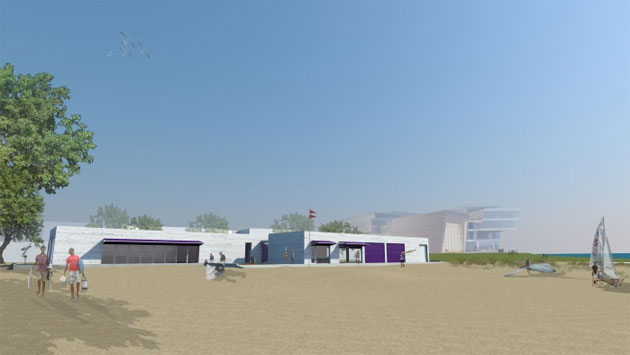 An architect's rendering of the new boathouse.

Northwestern also will construct a new boathouse in the area just east of the new visitors center and south of the existing parking garage.

The 5,000-square-foot structure, designed by David Woodhouse Architects, will be open from March to late October and serve Northwestern’s sailing community with its fleet of sailboats and windsurfing gear. In addition, the Sailing Center will be home to Northwestern University's sailing team.

Estimated cost of the new boathouse is $2.5 million. Construction is expected to begin this summer and take a year with completion slated for fall 2013.

A gallery of photos of the planned boathouse is available online.