Northwestern University has announced that the school’s president, Henry S. Bienen, plans to retire in August next year. 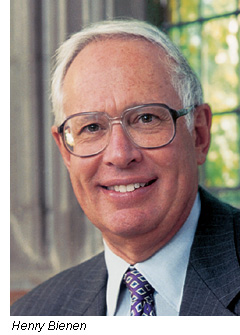 Bienen, 68, has been the university’s president since 1995. During his tenure the Evanston-based school’s endowment has quintupled and applications for admission have nearly doubled.

“Henry Bienen has had an extraordinary impact on Northwestern University,” the chairman of the board of trustees, Patrick Ryan said in a statement. “His academic leadership has helped attract outstanding scholars and students to the University and his enthusiasm for fundraising and financial acumen have provided the foundation for this institution’s remarkable success.”

In a letter to the Northwestern community, Bienen said, “I continue to enjoy my job immensely, but I truly believe that it is important for institutions to be refreshed regularly with new leadership."

“I have been privileged to work with many, many outstanding Northwestern faculty, students, staff, alumni and trustees,” Bienen added. “It has been an honor to serve as Northwestern’s president – and a great experience.”