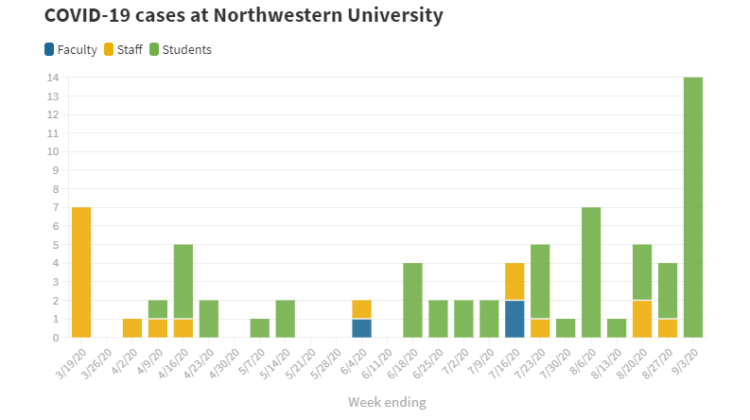 All the new cases this week were among students. The university has now reported a total of 73 cases among faculty, staff and students since the pandemic began.

By comparison, with 1,007 cases for a population of 75,000, about 1.34% of Evanston’s population has been diagnosed with COVID-19. Only NU faculty, staff and students who are Evanston residents would show up in the city’s count.

All NU students returning to campus are sent a home COVID test, and will also be tested upon arrival. The case count “reflect testing that was conducted on campus as well as some cases from the at-home testing program,” Yates adds.

What is not released is the total number of tests, as opposed to just the number of positive cases. “Evanston Now” has requested those numbers so we can calculate the positivity rate, a key indicator in the potential spread of the virus.

With classes scheduled to resume later this month amid an aggressive testing program, it’s likely that case numbers at the university will rise in coming weeks.

A New York Times database of coronavirus cases at U.S. colleges indicates there have been 772 cases at the University of Illinois Urbana-Champaign and 1,029 cases at Illinois State University in Normal, but much smaller numbers at most schools in the state, including just one case at Loyola University in Chicago.