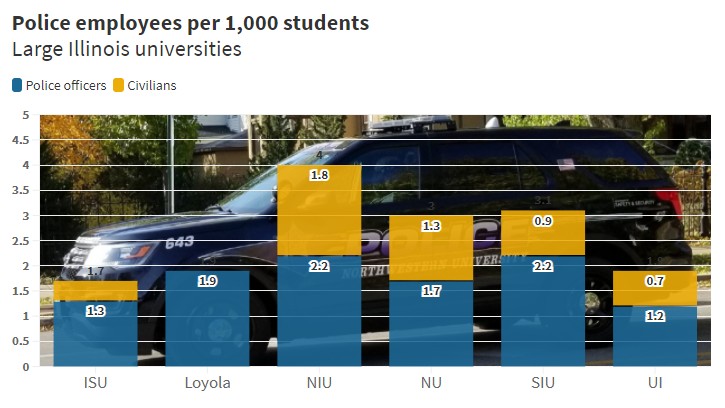 Northwestern University late Monday released a report saying it will spend $10.6 million on its police force this school year, down from $11.2 million last year.

The school produced the 36-page report in response to demands from protestors that it eliminate the security force.

The school says it currently has a total of 38 police officers and 29 civilian security staff members.

The latest figures for schools in Illinois of comparable size comes from the 2019 edition of the FBI’s Crime in the United States report.

The FBI data does not include security employees of third-party contractors. Northwestern says it has a full-time equivalent of 43 additional security workers employed by contractors.

By comparison, the 2019 FBI data showed the City of Evanston had 2.86 police employees for every 1,000 residents — the second-highest ratio of officers to residents among Illinois communities with 50,000 to 100,000 residents.

Based on discussions at Monday night’s City Council budget meeting, Evanston plans to eliminate more than a dozen police jobs in its 2021 budget and hold other positions vacant.

At mid-year, Evanston had 150 sworn police officers and 52 civilian police employees, which means the NU force is about one third the size of Evanston’s department.

If NU were to pare back the size of its police force, it likely would increase calls for service that Evanston officers would have to respond to.

This year the city is spending $41.1 million on police operations and another $13.4 million in police pension fund contributions.

The university says it spends 0.42% of its overall budget on policing. Including pensions, police costs amount to about 18% of total spending by the City of Evanston.