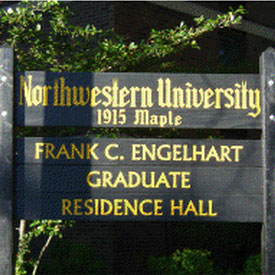 The victim told police that two men approached him from behind. The first one grabbed him by the neck as the other brandished a large wooden stake.

The two demanded money and the victim turned over $10 in cash and his iPhone.

The robbers then fled westbound on Foster Street.

The student, who was not injured, called police on an emergency phone.

Evanston and university police searched the area but were unable to locate the suspects, who were described as both being thin black males about 5-foot-7- to 5-foot-8-inches tall. One was said to be wearing a black tank top and a black baseball cap worn backwards.

University police are asking anyone with information about the incident to contact them at 847-491-3456.