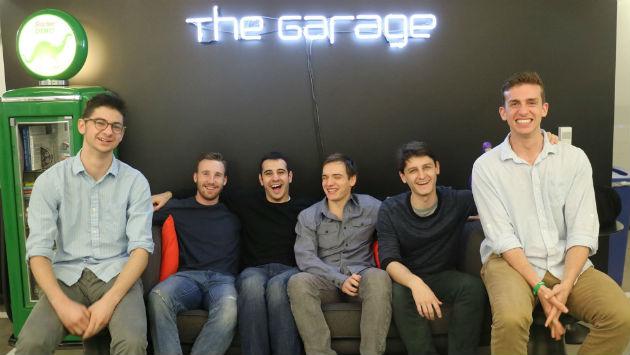 The deal marks the first acquisition of a company incubated at The Garage, Northwestern’s hub for student entrepreneurship and innovation. Zcruit, which will become a wholly owned subsidiary of Reigning Champs, will retain its name and operate out of a Chicago-based office.

“The Zcruit team demonstrates what can happen when you combine passion and grit with all of the support Northwestern can bring from the athletics department, the Farley Center, The Garage, the Northwestern alumni network and on and on,” said Billy Banks, associate director of The Garage.

Zcruit uses predictive analytics to optimize the recruiting process for college football programs, saving universities time and money. A group of four undergraduate students founded the company with no funding and very little experience in the technology industry. With the support of Northwestern’s alumni network and mentors at The Garage, in just a few years, they have grown the company into a platform that serves multiple Division I football programs at universities around the country.

“Our whole team learned a lot from this experience, and it took a village to get Zcruit to where it is today. While we worked hard to build and sell the product, the number of Northwestern students, faculty and alumni who helped Zcruit get off the ground in the first place is immense,” said Ben Weiss, student co-founder of Zcruit and a 2017 graduate of Northwestern’s School of Education and Social Policy.

Weiss will continue to oversee Zcruit’s products and operations as a full-time employee of Reigning Champs.

According to Banks, that was when things exploded for Zcruit.

“USA Today wrote an article, and suddenly schools like Notre Dame were calling The Garage looking to talk with Zcruit,” Banks said, referring to a profile of the company published by USA Today in January 2017. “I would meet with the students periodically to provide guidance and feedback, but mostly just to watch as they continued to gain confidence and altitude.”

Drawing from strategies that university admissions offices use to predict which students are most likely to accept offers of admission, Zcruit developed an algorithm to identify which high school football players would be most likely to commit to a given college football program.

The analytical approach to a field often driven by gut instinct was so innovative, it caught the attention of Northwestern Football’s director of player personnel Chris Brown, who gave Zcruit an opportunity to test their algorithms during Northwestern’s 2016 recruiting season. Ninety-four percent of the time, Zcruit’s algorithms successfully predicted whether or not the recruit would accept Northwestern’s offer to play.

Zcruit’s founders were part of the first cohort of The Garage’s residency program, which provides student entrepreneurs an opportunity to take their ventures to the next level with access to co-working space, mentorship and community support.

Melissa Kaufman, executive director of The Garage, says Been reached out to her in the fall of 2015 when The Garage was just getting started.

“From that first interaction onward, Ben has eagerly taken advantage of all the resources The Garage has to offer,” she said. “We’ve enjoyed watching him grow an idea into a business and now an acquisition. We couldn’t be prouder of Ben and his team.”

Hunter Hillenmeyer, former linebacker for the Chicago Bears and a graduate of Northwestern’s Kellogg School of Management, worked closely with Zcruit as a mentor.

“Ben and the Zcruit team are a success story in many ways. They saw a market need and built technology around it. As they gained traction, they used the support of Northwestern, especially unique programs like The Garage, to springboard them to success,” Hillenmeyer said. “Ben has proven to be a great entrepreneur, and I think his best days are ahead of him.”

Zcruit’s success is a result of a dynamic, hard-working team and also a byproduct of Northwestern’s thriving entrepreneurial ecosystem.

“I think Reigning Champs is a great growth partner for Ben and Zcruit because they have the resources to take Zcruit to the next level,” Persa said. “As an alumnus, I am proud to say Ben and his team trusted me enough to ask for advice along the way. It is extremely gratifying to help Northwestern students and alumni find ways to be successful in their professional careers. Ben is another great example of how Northwestern continues to produce talented and forward-thinking entrepreneurs.”

Weiss said he grew up watching players like Persa and Bachér on TV and was thrilled to have their support as he and the other founders developed Zcruit’s platform.

Bachér said after his first meeting with the team, he knew they had a great idea “with the potential to revolutionize the unpredictable and highly volatile world of college football recruiting.”

McRoberts said of Weiss, “He has the entrepreneur in him — in his perspective, enthusiasm and business acumen. He knows how to ask the right questions, and it’s really impressive how quickly he’s been able to judge the landscape of this particular area and be able to acquire customers so quickly, which is a challenging thing to do. He put together an excellent product that people liked and got it out there quickly.”

Weiss and his team were named one of 10 Illinois Student Startups Set to Make Moves in 2017 by Chicago Inno, and Zcruit was recognized as one of the five most outstanding student startups at the 2017 EntrepreneurshipU Awards.

In addition to The Garage’s Residency Program, Zcruit was a part of The Garage’s inaugural Wildfire pre-accelerator program in the summer of 2016 and Winter Wildfire in the winter of 2017. In May 2017, Zcruit took home prize money in the B2B track ofVentureCat, Northwestern’s annual student startup competition.

“The Zcruit team members followed their passion, built Zcruit from scratch, taking advantage of resources and mentorship offered across campus and hustled their way from idea to acquisition,” Banks said. “I am proud to be a part of the large army of individuals who helped them along that journey.”