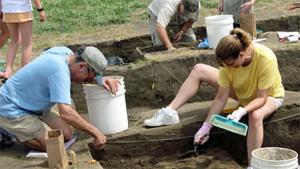 Northwestern University researchers ditched many of their high-tech tools and turned to large stones, fire and some old-fashioned elbow grease to recreate techniques used by Native American coppersmiths who lived more than 600 years ago.

This prehistoric approach to metalworking was part of a metallurgical analysis of copper artifacts left behind by the Mississippians of the Cahokia Mounds, who lived in southeastern Illinois from 700 until 1400 A.D. The study was published last month in the Journal of Archaeological Science.

The researchers were able to identify how the coppersmiths of Cahokia likely set up their workshop and the methods and tools used to work copper nuggets into sacred jewelry, headdresses, breastplates and other regalia.

“Metals store clues within their structure that can help explain how they were processed,” said David Dunand, the James N. and Margie M. Krebs Professor of materials science and engineering at Northwestern’s McCormick School of Engineering and Applied Science and co-author of the paper. “We were lucky enough to analyze small, discarded pieces of copper found on the ground of the excavated ‘copper workshop house in Cahokia and determine how the metal was worked by the Cahokians.”

Two materials science and engineering students conducted much of the research. Matt Chastain, a Northwestern undergraduate at the time of the study, worked alongside Alix Deymier-Black, a graduate student in the materials science and engineering department. Chastain, first author of the paper, undertook the metallurgical analysis of the samples, supplied from ongoing excavations at Mound 34 in Cahokia. Chastain followed up his analysis by volunteering at the excavation site.

“We cut through some samples of the copper pieces and polished them to look at the grain structures of the copper with a microscope,” said Deymier-Black, second author of the paper. “From the size, shape and features of the grains inside the copper, we determined that the coppersmiths were likely hammering the copper, probably with a heavy rock, then putting the copper in the hot coals of a wood fire for five to 10 minutes to soften it and repeating the cycle until they had created a thin sheet of copper. “

After using basic metallurgical science to better understand the methods the Cahokians used to create copper sheets, Deymier-Black and Chastain recreated the metalworking process in the lab with natural copper nuggets, fire and a heavy stone —pounding and heating the copper into thin sheets.

The researchers also tested theories that some archeologists had made about the coppersmiths’ techniques. One idea was that they made large copper pieces, like ceremonial breastplates, by “laminating” sheets of copper together through a hammering technique. Deymier-Black said that the lamination could not be reproduced, even with much greater weights achievable with a modern press. The other hypothesis, that the Cahokians used copper knobs or copper rivets and other mechanical devices to secure sheets of copper together, seems more likely.

Another puzzle was how the Cahokians cut the hammered sheets of copper into regular shapes. The researchers cut replicated hammered sheets by four different methods: grinding an embossed ridge, shearing with scissors, hammering against a sharp corner, and bending the sheet back and forth. Only the bent edge looked similar to the edge of the historical artifacts, indicating that the Cahokians most likely used that method to cut copper.

Scientific insight into the process used to create the sacred copper artifacts of Cahokian people is helpful to James Brown, professor of anthropology at Northwestern Weinberg College of Arts and Sciences and John E. Kelly, professor of anthropology at Washington University in St. Louis. The two researchers, co-authors on the study, are credited with pinpointing the location of the copper workshop at Cahokia.

“I’m delighted that through the scientific process we were able to confirm some of the techniques and end some disputes about how the copper artifacts were made,“ said Brown, also an international expert on Native American archaeology. “This study gives some of the real details, so that an observer can imagine how it was done and could possibly hook onto other kinds of observations about the people of Cahokia.”

Archaeological fieldwork at Cahokia’s Mound 34 is made possible by grants from the Cahokia Mounds Museum Society and the National Geographic Society, and by field schools through Washington University and the University of Missouri at St. Louis.