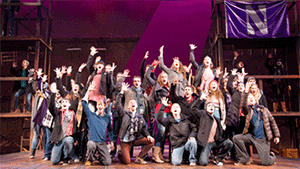 Northwestern University's theater program is ranked among the top 10 drama schools in the world.

That's according to a poll of 60 top casting directors and agents by The Hollywood Reporter.

Northwestern's program, part of the university's School of Communications, ranked eighth in the poll.

The only other Chicago schools to make the top 25 list were Second City, ranked 14th, and DePaul, ranked 21st.