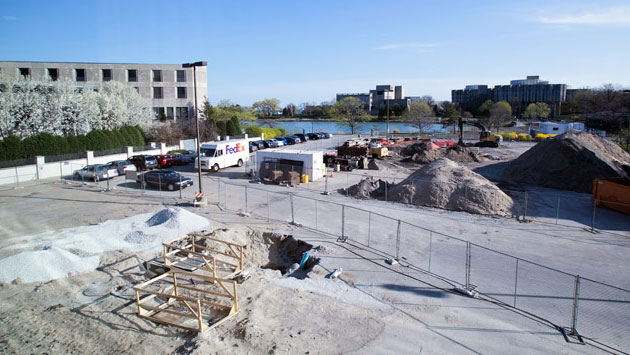 One of the most well-known lyrics in popular music is the phrase, “They paved paradise and put up a parking lot” from the Joni Mitchell hit, “Big Yellow Taxi.” Now Northwestern University plans to reverse that process.

The area now used for parking and construction staging that's to be turned into a green space.

One of the most well-known lyrics in popular music is the phrase, “They paved paradise and put up a parking lot” from the Joni Mitchell hit, “Big Yellow Taxi.” Now Northwestern University plans to reverse that process. 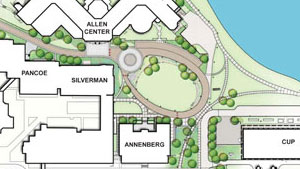 The main parking lot just west of the Allen Center since last year has been a construction site and staging area for work associated with expansion of Northwestern’s underground steam and chilled water distribution system.

With that work nearing completion, the University plans to create additional green space rather than rebuild the parking lot. In addition, the University will convert a small parking lot south of Annenberg Hall into a landscaped area. That space will provide a handicapped-accessible pathway from the walkway on the west side of Annenberg down a small hill to the Mid-Campus Green.

Creating the new green spaces follows the University’s Framework Plan, which guides the long-term development of the Evanston campus, said Eugene S. Sunshine, senior vice president for business and finance. The plan, which was adopted in 2009 after extensive input from students, faculty and staff, calls for the creation of additional green space in the center of campus and pushing parking to the edges of campus.

“The Mid-Campus Green will provide an oasis in the center of campus while strengthening pedestrian links between north and south campus,” Sunshine said. “In addition, it will extend the existing landscaped area near the science buildings further south toward the University Library. Our goal, as was outlined in the Framework Plan, continues to be to make the campus more pedestrian-friendly and provide green spaces throughout campus.”

A road currently open to all vehicles that goes east from the large parking lot in the center of campus between Swift Hall of Science and Garrett-Evangelical Theological Seminary will become essentially a service road.

The road will continue to provide access for service vehicles for the Allen Center, University Library and the Central Utility Plant, as well as for emergency access. A small parking area will be located on the east side of the Green next to the Allen Center for guest drop-off and associated parking.

Work on the underground utilities in the area is expected to be completed in June. Conversion of the construction site to the new green space will begin immediately afterwards, with completion expected in December and final landscape planting to be completed in spring 2013.