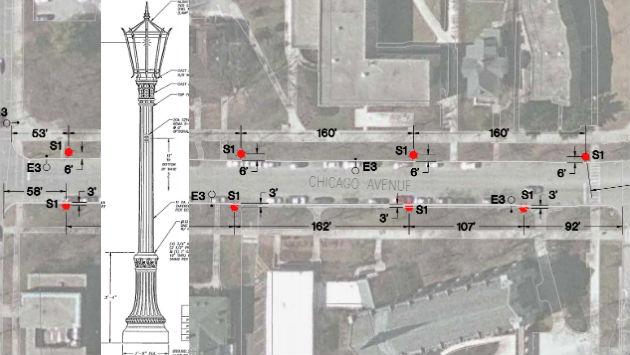 Northwestern University will seek City of Evanston approval next week for it to add 26 traditional Tallmadge street lights on Sheridan Road and Chicago Avenue through the campus.

The lights are part of a larger project to repave Sheridan and add a bike path connecting the campus with downtown Evanston.

The new lights will be in addition to the cobra-headed highway-style lights now used on that stretch of road.

NU recently installed pedestrian lighting just behind the sidewalk on the east side of Sheridan.

According to specifications prepared for the scheduled review of the plans by the city’s Design and Project Review Committee on Wednesday, the LED bulbs in the new Tallmadge lights will provide 9,600 lumens of illumination — about 50 percent more than the city’s existing Tallmadge fixtures in the neighborhood.

But that’s less than half the light provided by the pedestrian light fixtures installed by the university and about a third of the brightness of the existing cobra head fixtures on the roadway.