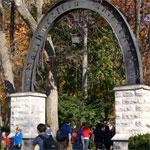 The announcement was made during the mayor's annual State of the City speech at the Hilton Orrington Hotel.

“My thanks to President Schapiro for the Good Neighbor policy and this wonderful investment in our community. Northwestern is one of the great universities in the country, which is a tremendous asset for Evanston,” the mayor said.

Under an agreement, Northwestern agrees to donate $1 million annually to the City of Evanston for the City’s “Good Neighbor Fund” for a period of five years starting Sept. 1.  Proceeds from this donation will be spent on projects and services agreed to jointly by the mayor and NU's president.

Every July 1, the Mayor of Evanston will develop a list of projects and services to be eligible for funding and provide that to Northwestern. The mayor and president will review the list and agree on projects and issues to be funded during the next 12 months.

“We’re very pleased to make this donation to the City of Evanston. One of Northwestern’s greatest assets is its location in Evanston, so we look forward to providing additional support for the important work that the City does,” Schapiro said.

Since assuming the Northwestern presidency in 2009, Schapiro has approved funding of $550,000 to the city for a new fire engine, $253,000 for a new ambulance, and has funded a fulltime office at Evanston Township High School to increase collaboration between the school and the university.

In addition, the university has become a major funding partner in the communitywide Cradle to Career initiative, along with the two public school districts, the city, and about two dozen not-for-profit organizations, to coordinate efforts to help the community’s young people to succeed in their early-years development.

“Northwestern and Evanston have been partners for more than 150 years and the relationship has been mutually beneficial to both the university and the city. This commitment ensures that this partnership will remain strong,” Schapiro added.