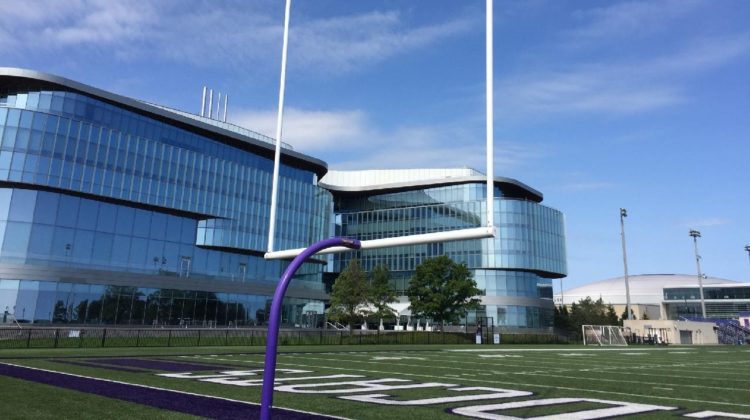 The NU football practice field on the Evanston lakefront.

The return of Big Ten football next month could mean something in the neighborhood of $50 million dollars for Northwestern University, mostly in TV money.

But with no fans in the stands, the City of Evanston will not get any ticket tax revenue. And restaurants, hotels, and souvenir stores will not have thousands of customers to eat, sleep and buy Wildcat t-shirts.

But the Big Ten says there will be no ticket sales to the general public due to concerns over COVID-19. Players’ and coaches’ family members might be allowed to attend, but that would only be a few hundred people, who might get in free anyway.

USA Today reports that in fiscal 2018 each Big Ten team received a $54 million payout from the Conference (except for newcomers Maryland and Rutgers, who received less), mostly from television deals such as the Big Ten Network. In fact, Northwestern makes far more from television than it does from ticket sales from the average 37,000 fans at each game.

TV revenue may be somewhat lower this season, because the season will be shorter, nine games instead of 13. There will be eight regular Big Ten season games. After that, the two division winners play for the championship. Below them, second place in one division plays second place in the other, third plays third, and so on.

Besides losing out on ticket tax revenue, the City will also not see the usual hotel and liquor tax or parking fee revenue. There are also sales taxes on sports memorabilia items.

Cindy Garborek sells such items at her “Let’s Tailgate” store near Ryan Field. But there won’t be any tailgating this season, and there won’t be lines of fans in her store to purchase hats, sweatshirts and other Wildcat souvenirs.

“It’s not good,” says Garborek. Business has been “very slow, very, very rough” during the pandemic. She was hoping a football season could help turn things around. Football without football fans will not do that.

Despite concerns over her own business, Garborek says the pandemic has “been terrible. It’s hard to think about money with people dying.”

Can she make it to next fall, when perhaps football will actually have fans show up? “Time will tell if we survive or not,” she says. “I come in to work every day. We’ll try.”