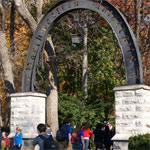 Northwestern University today announced a $5 million gift to the school, most of which will be used to fund scholarships for graduates of Chicago public schools to attend NU.

Cari and Michael Sacks have directed that $3.6 million of the gift go to the scholarship program.

The Sacks’ gift will enable academically talented, low-income CPS students to attend Northwestern,and help eliminate loans in financial aid packages for those students, so the students can graduate without debt.

“Northwestern is deeply committed to supporting Chicago Public Schools students and providing opportunities to experience a world-class education. We are grateful for Michael and Cari’s continued support of Northwestern and their extraordinary commitment to CPS students,” Northwestern President Morton Schapiro said.

The new endowed scholarship fund builds upon the University’s longstanding academic partnerships with CPS and its commitment to CPS students. It also aligns with Northwestern’s Good Neighbor, Great University program, which helps motivate CPS and Evanston students to pursue college and provides scholarships if they elect to come to Northwestern.

In the 2012-13 academic year, 178 students received scholarships under the Good Neighbor, Great University program. That number has grown from 35 students in 2010-11, the first year of the program.

“Cari and I are proud to focus our additional support on helping CPS graduates who attend Northwestern,” Michael Sacks said. “We want to create more opportunity for CPS kids and there is no better opportunity than a Northwestern education.”

Michael Sacks received a joint law degree and MBA from Northwestern in 1988. He has been a University trustee since 2007.

Cari Sacks is a civic and community leader. In 2010, she was appointed to the President’s Advisory Committee on the Arts for the John F. Kennedy Center for the Performing Arts.