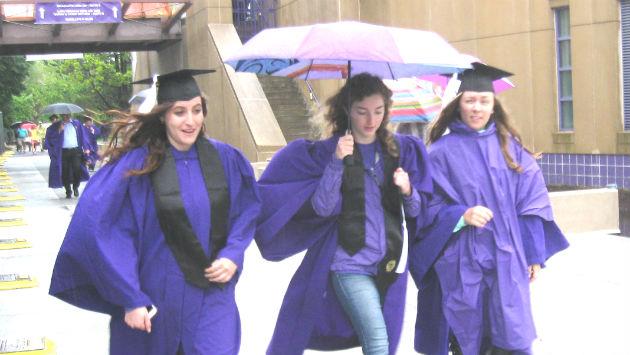 Most of the 2000 members of Northwestern University’s Class of 2018, along with stalwart family and friends, braved a steady Seattle-type drizzle Friday morning to conclude their years at the university with commencement exercises at Evanston’s Ryan Field.

Operatic soprano Renee Fleming, herself the mother of a 2017 NU graduate, gave the commencement address, accompanied by a gospel-style chorus that cleverly accented and augmented her remarks.

The graduates, sporting matching clear ponchos over their purple gowns, filed in with traditional good humor and relief at having successfully concluded matriculation at one of the nation’s leading universities and took their seats in the open while their deans, administrators, and alumni leaders sat in a covered area that shielded them from the dampness.

Covered area for the dignitaries

Arguably the best seats in the house, however, were in the auditorium of the Norris Center, where many of the older supporters, including some who were physically challenged, watched on a huge screen that projected a live-streamed version of the proceedings.

Fleming, currently starring on Broadway in a production of Carousel, challenged the graduates to develop a caring philosophy as they become a member of the citizenry chorus.

She reminded them that success in life is typically achieved 10 percent by talent and 90 percent by sweat as she welcomed the “new voices that will enrich our lives and give us hope.”

Fleming was one of four persons given honorary degrees at the ceremony. Hers was a Doctor of Arts. The others went to American lyricist Sheldon Harnick (Doctor of Arts), William A. Osborn, chair of the university’s Board of Trustees (Doctor of Humane Letters), and Subra Suresh, one of the world’s top researchers in materials science and engineering (Doctor of Science).