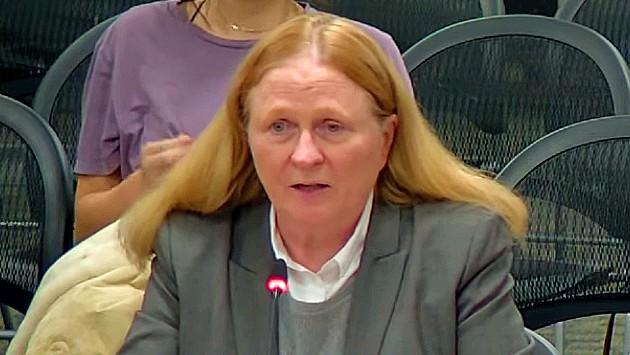 “Our board has asked us to begin exploration of establishing ourselves here in Evanston,” Anne Brennan, Oakton’s assistant vice president for academic affairs and college transitions, told the Evanston Township High School board Monday night.

“We want to understand what population of Evanston graduates is not choosing college and what might we have to offer them,” Brennan added.

“We believe that location or proximity has been the most obvious factor in students not coming to Oakton from Evanston,” she said, “so why shouldn’t we be in Evanston?”

The boundaries of Oakton’s District 535 service area are shown in this map from the Cook County Clerk’s office.

Evanston’s representation on Oakton’s Board of Trustees has increased dramatically recently — to five of the seven board members, with the election of three Evanston residents last spring.

Evanston has nearly 17 percent of the district’s population, but only about 8 percent of Oakton’s students live in Evanston.

In addition to its main campus in Des Plaines, Oakton also operates a campus in Skokie.

According to minutes from the Sept. 24 meeting of the Oakton board, College President Joianne Smith said that the school had looked into purchasing the former Foster School building, but the costs — $2.4 million to buy it and about $17 million for renovations — made it not a feasible option.

For its next steps, the college will conduct an enrollment forecast study and identify square footage needs and potential existing spaces in a variety of Evanston locations.

In a presentation to the District 202 board, Brennan said that enrollment at both of Oakton’s campuses has declined over the past five years, although the number of students taking courses online as well as on campus has increased slightly. The on-campus enrollment has dropped about 29 percent during that time.

Oakton’s goal is to increase the “yield rate,” or the percentage of ETHS graduates who enroll at Oakton, which has hovered at 9% to 10% for the past four years.

To that end, Brennan said, an Oakton representative is now at ETHS all day on Mondays (up from a half day last year) to help advise students toward college and Oakton.

Enrollment in dual-credit courses, in which ETHS students take Oakton courses at the high school and receive both high school and college credit, has more than doubled, from 258 last year to 394 this year, she said.