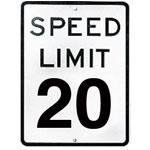 A plan from Alderman Coleen Burrus, 9th Ward, to cut the speed limit on Oakton Street between Dodge and Ridge avenues to 20 miles an hour is running into objections from city staff.

The City Council is scheduled tonight to review a proposed ordinance that would make the change Burrus wants, but a staff memo suggests making other changes — including targeted police enforcement of current speed limits and setting up lighted speed display monitors along the road several times a year.

Chute Middle School and Oakton Elementary School are on that stretch of Oakton and existing school speed limit signs restrict speeds to 20 miles in hour near the schools when children are present.

The city currently has 20 mile an hour speed limit signs posted around Evanston Township High School on Church Street and Dodge Avenue, but neighbors frequently complain that those limits are routinely violated.