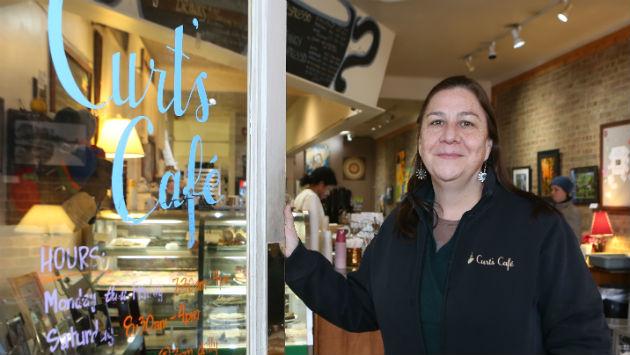 Susan Trieschmann, founder of Curt’s Cafe in Evanston, is one of five Oakton Community College grads the school will honor at its first Distinguished Alumni Awards ceremony on May 3.

The awards, presented by the Oakton Educational Foundation and Office of Alumni Relations, recognize former Oakton students who have excelled professionally and provided inspirational service to the community.

Prior to enrolling at Oakton at the age of 48, Trieschmann had been the head of catering at Chicago’s Pump Room and the founder of Food for Thought, the third largest caterer in Chicagoland.

After Oakton, the Wilmette resident earned a bachelor’s degree in social justice from DePaul and is now providing workforce and life-skills training for at-risk youth as the founder and executive director of Curt’s Café in Evanston.

“Oakton is a launching point for many successful careers,” said Mary Knight, the school’s executive director of development. “We wanted to recognize this first class of individuals as distinguished alumni for their professional achievements and contributions to the community.”

The selection committee received many nominations for former students that earned an Oakton degree, certificate or completed a minimum of 24 credit hours. Nominees not selected among the inaugural class will remain in consideration for the following three years.

In addition to Trieschmann, those being honored are Marc Hornstein, Felicia Kurkowski, Marc Menet and Steven Swanson.

Hornstein, of Gurnee, earned an associate of applied science in law enforcement in 1991 and is now the deputy chief of the Winnetka Police Department, where he has worked with residents, schools and businesses to improve safety throughout the community since 1993. He earned a bachelor’s degree in criminal justice from the Northwestern University School of Police Staff and Command, and a master’s degree from Lewis University.

Kurkowski, a resident of New Port Richey, Fla., earned an associate of arts in liberal arts in 1990. She went on to earn her bachelor’s degree from Northern Illinois University and a nonprofit management and leadership certificate from Northwestern University’s Kellogg School of Management. She is director of project development at Pathways.org, where she has created and conducted more than 100 in-service programs for pediatric and family medicine residents and nurse practitioners since joining the organization in 1989.

Now a cinematographer and DePaul University adjunct faculty member, Menet went on to earn his bachelor’s degree in cinematography and film/video production at Columbia College and master of fine arts degree in digital cinema from DePaul after earning an AA degree in liberal arts from Oakton in 2000. The Chicago resident’s work has appeared in film festivals around the world and on National Geographic, Showtime, PBS, History Channel, Discovery, Fox, Fox Sports, VH1, Weather Channel, NBC and others.

Swanson is the dean of the University of Wisconsin-Madison’s School of Pharmacy. After completing general education and science courses at Oakton, he earned his bachelor’s degree in biology from Loyola University of Chicago and his doctorate in pharmacognosy at the University of Illinois at Chicago. He has also served as a member of the National Institutes of Health Chemo-Dietary Prevention Study Section and as a scientific reviewer for the Department of Defense congressionally-directed medical research programs in prostate and breast cancer.

The event is free to Oakton alumni and friends. RSVP to alumni@oakton.edu by Friday, April 21.