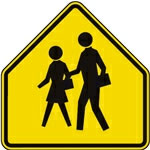 There were 12 crashes in the school zone around Oakton between 7 a.m. and 4 p.m. on weekdays during the school year.

The next highest total was 11 accidents near Evanston Township High School.

Some neighbors near Oakton have been calling for increased traffic control measures around the school, especially since a young girl was struck and injured in a crosswalk there nearly two weeks ago.

Two other schools also located on Oakton Street were the scene of substantially fewer accidents. Chute Middle School had 6 and Dawes Elementary School had 5.

Here's the accident count in school zones near other Evanston schools for 2011, included in the police department's annual report:

The number of accidents with injuries declined 16.8 percent over the same period, from 332 to 276.

The City Council early this year rejected a proposal to lower the speed limit on Oakton near the school to 20 miles per hour 24 hours a day. That limit is already the law on school days when children are present.

But police have responded to the issue with stepped up patrols, and the city's public works department has used flashing signs to warn motorists they're exceeding school speed limits.

Child hit by car near Oakton School in Evanston