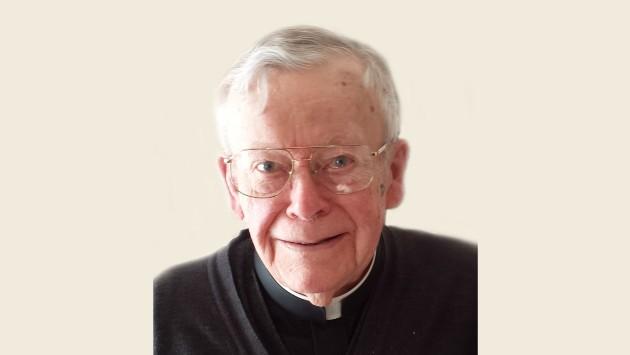 The Rev. Daniel L. Banner, 91, of Quincy, formerly from the Chicago area, passed away peacefully on the morning of Friday, March 13, 2020 in the Good Samaritan Home.

Daniel was born on July 7, 1928 in Bloomington, IL, the son of Francis Lee and Margaret Kendall Lawrence Banner. Throughout his childhood, Daniel’s family moved numerous times before settling in Decatur, IL.

Father Banner first served as curate at St. Paul’s in Alton, IL followed by a three-year stint in southern Illinois as vicar of both St. John’s in Centralia and St. Thomas’s in Salem, mission churches less than 18 miles apart.  In October of 1956, Father Banner began new duties as curate at St. Luke’s in Evanston, serving in this position for three years. For the next eleven years, he served at St. Joseph’s on the southside of Chicago; as vicar during its period as a mission church and then as rector until 1967.

In 1970, Fr. Banner accepted the call to be the rector at St. Paul’s Church by-the-Lake in the Rogers Park neighborhood of Chicago.  During his twenty-two years at St. Paul’s, he shepherded the parish through the challenges resulting from the adoption of a new Prayer Book in 1979 and presided over the concept and implementation of an Endowment Fund to provide the church with financial security for the future.

His wisdom, calm demeanor, gentle spirit, and delightful humor made him beloved by his family members and the congregants in every church where he served.

Prior to his retirement and subsequent move to Quincy in 1992, Fr. Banner made numerous trips to Great Britain and became a great admirer of Queen Elizabeth and a collector of Royal Family memorabilia.

He was an avid reader, an astute bridge player, and a crossword puzzle wizard.  His “bow wows”, as he affectionately referred to his canine companions Addie and then Queenie, often accompanied him to church and on trips to visit family and friends.

During his retirement years in Quincy, he enjoyed assisting at St. John’s and taking communion to the shut-ins at the local Veterans Home.

A Golden Jubilee celebration was held at St. John’s in the fall of 2003 in honor of the 50th Anniversary of his ordination.

A Requiem Mass will be held at St. John’s Anglican Parish (701 Hampshire) at 10:30 am on Monday, March 30, 2020 with the Rev. Patrick Smith officiating. A Live Stream of this service will be made available to all those interested by contacting Hansen-Spear Funeral Home at [email protected]

Graveside services and burial will take place at Oak Grove Cemetery in LeRoy, IL on Monday, March 30th at 3:30 pm.

A visitation is no longer planned prior to the funeral services, however, Fr. Banner’s family hopes to schedule a celebration in his memory at a later date.

Memorial contributions may be made to St. John’s Parish or the Quincy K-9 Connection.

Hansen-Spear Funeral Directors are in charge of the arrangements.