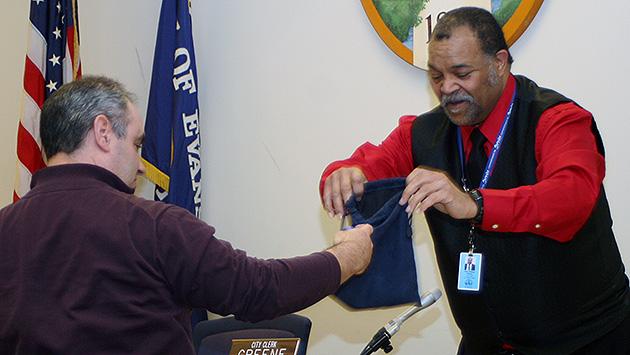 A supporter of Alderman Judy Fiske has filed a formal objection to the petitions filed by challenger Edward Tivador to get on the ballot in the race for 1st Ward alderman.

Greene didn't specify the substance of the objection, but said that it would be heard by the city election board at a meeting to be held Thursday or Friday of next week.

The members of the board, in addition to Greene, are Mayor Elizabeth Tisdahl and the longest-serving alderman, Ann Rainey.

In other election news, Greene announced at Thursday night's lottery to determine ballot positions that James C. Dyer, of 1620 Pitner Ave., has withdrawn as a candidate for 2nd Ward alderman, leaving incumbent Peter Braithwaite unopposed in his race for a first full term, after being appointed to the position by Mayior Tisdahl, after former alderman Lionel Jean-Baptiste resigned to become a circuit court judge.

With Rainey's challenger, Thomas K. Just, of 327 Sherman Ave., having already withdrawn from the race, and Fiske having filed before Tivador to earn the first slot on the ballot, that left just one tie in filing times to break.

Challenger Mark Sloane drew the winning blue ball from a bag Greene held to take the first ballot slot. Incumbent Alderman Mark Tendam, 6th Ward, who didn't attend the drawing, will appear in the second position on the ballot.

If Fiske should be successful in ousting Tivador from the ballot, that would leave the 6th Ward race as the only contested contest on the city ballot.

Two candidates are also running for township supervisor. In that contest, Gary Gaspard earned the first ballot slot by filing first. He will be opposed by Keith Banks.