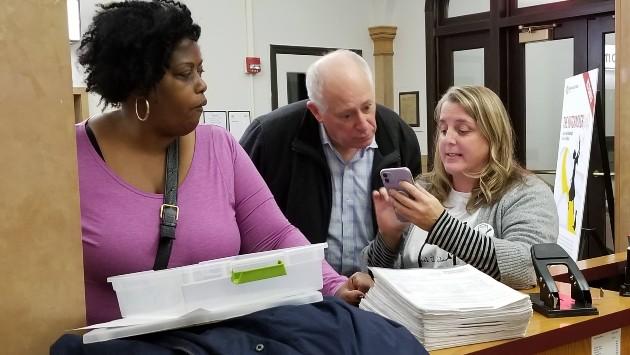 The Evanston City Clerk’s office says objections have been filed seeking to keep one candidate for clerk and four candidates for alderman off next year’s election ballot.

Allie Harned has filed an objection to the petitions of former Alderman Jane Grover, who’s seeking to become city clerk.

Grover was one of three objectors who in January persuaded the city’s Electoral Board to strike a voter initiative referendum promoted by Harned from the March ballot.

Harned’s objection claims a large number signatures on Grover’s petitions are invalid — for reasons including that the persons signing aren’t registered voters or don’t live at the address given or that the signatures are not genuine.

Harned says that with the invalid signatures removed, Grover lacks enough signatures to qualify for the ballot.

A half dozen people, including David Foster, the husband of incumbent Alderman Melissa Wynne, 3rd Ward, have filed an objection to the candidacy of Eric Young, who’s seeking to replace Wynne.

The group says Young’s petitions weren’t properly bound together as required by the state election code, that he incorrectly cited the April election rather than the February primary in his petitions and that after discounting signatures that can’t be verified, he doesn’t have enough petition signatures to qualify for the ballot.

A second objection to Young’s candidacy has been filed by 3rd Ward resident Miles Davis. That one focuses on the lack of binding of Young’s petition signatures.

In the 5th Ward, Willy L. Jefferson is seeking to have Rebeca Mendoza excluded from the ballot, claiming her petitions were not properly bound together.

In the 8th Ward, Tom Oser and Nikole Mitchell Hall object to the candidacy of Shelley Carrillo because her nominating papers only said she was running for “alderman” rather than “8th Ward alderman.”

The city’s Electoral Board is expected to meet Monday to hear the objections. The board is composed of the mayor, the city clerk and the city’s longest serving alderman, Ann Rainey.