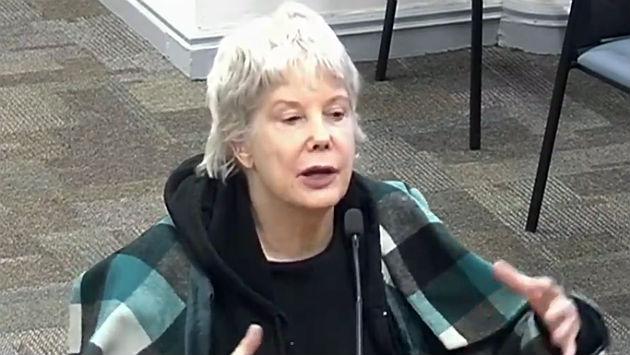 Eleven opponents of a proposed office building at 1714 Chicago Ave. turned out Wednesday night at an Evanston Plan Commission meeting to object to a zoning text amendment that might ease the project’s path to approval.

At the request of one of the objectors, the Commission postponed action on the text amendment until its next meeting on June 12.

As reported by Evanston Now on Tuesday, the amendment proposed by Alderman Judy Fiske, 1st Ward, would open up options for office uses in portions of some high-density residential districts downtown.

That would eliminate the need for a zoning map amendment to build the structure proposed for what’s now a city-owned parking lot across an alley from the Evanston Public Library.

Because of a petition filed by neighbors objecting to the change, the map amendment would require approval of seven of the city’s nine aldermen.

A text amendment requires only a simple majority vote of aldermen for approval.

And if the text amendment now proposed were adopted, the office project could be resubmitted for approval without requiring a map amendment, and it would then need backing from only six of the nine aldermen.

The two-thirds vote, instead of a simple majorty, would be required because the deal involves the sale of public land.

Anna Roosevelt of 1028 Judson Ave., representing the Southeast Evanston Association, said the text amendment would change the ability of neighbors to have an impact on what development is allowed.

“This kind of ordinance change has rather wide implications for the nature of residential neighborhoods and the location of office developments,” Roosevelt said.

“It would be more logical to consider this kind of change in the context of a broader discussion” looking at the city’s goals for the next decade in relation to the city’s general plan, she added.

Former Alderman Mark Tendam of 2448 Lincolnwood Drive said he was concerned that parking needed for office buildings creates a “darken monolith at night.”

But Commission Vice Chair Peter Isaac said a new residential building in the same zone could have the same sort of parking garage at its base.

And Meagan Jones of the city’s planning staff said the issue of how to make any parking garage less unattractive would be something the city’s Design and Project Review Committee would address. “It would not want to have a whole blank wall,” Jones said.

But Tendan said the DAPR review “has no teeth. It hasn’t stopped Council from approving it.”

Fiske didn’t attend the meeting and her absense drew criticism from some of speakers who said they would like to have heard her rationale for seeking the change.

The proposed text amendment would affect the parcels outlined in red on the map above.

Latest figures from the real estate research firm CoStar indicate that Evanston currently has an office vacancy rate of about 5 percent — which is considered very low.

Fiske has argued that the city needs to add more office space to accommodate that demand and to draw more workers into the downtown area to support retail businesses there.