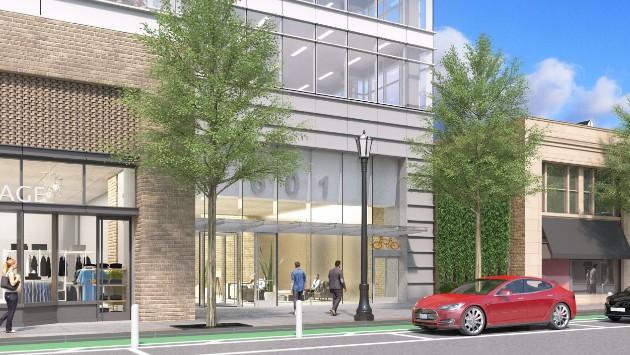 But Community Development Director Johanna Leonard said that because of scheduling issues around the holidays, the project may not be reviewed by the city’s Plan Commission until February.

City staff continued to voice fears that the Chase Bank drive thru included in the plans would create safety hazards for users of the protected bike lane that runs in front of the site.

They conditioned approval on adding restrictions that would assure the drive thru was replaced with retail space and the curb cut removed if Chase ever abandoned use of it.

They also conditioned the approval on the developer committing to a five-year lease of parking spaces in the city’s Church Street garage rather than the one-year lease the developer had proposed, before the number of spaces included in the lease would be renegotiated based on actual usage.

Architect Jay Longo displays samples of bricks planned for use on the ground-floor facade of the tower.

Atypically for a DAPR session discussing a high-rise development, public comment at the meeting favored the project. That also was a switch from negative public comments at DAPR’s meeting last month on the 601 Davis development.

Representatives from Bird-friendly Evanston praised the developers for including special glass in the windows designed to reduce the number of birds killed colliding with the glass — even though the city does not require such protections.

Jack Weiss of Design Evanston said the group had reviewed the project and concluded that more office space is much needed downtown, that the size of the building is appropriate for the site and that even a taller — though more slender — buiding would be appropriate as well.

Matt Rodgers of 133 Clyde Ave. said Evanstonians need to get over their fears of tall buildings and that a new Class A office building is much needed in the city for it to remain competitive in attracting employers of office workers who will become customers for downtown restaurants and shops.

City staff also pressed for a more extensive set of “public benefits” from the project, noting that developers of the nearly-completed Albion Evanston apartments had agreed, among other things, to take over maintenance of a small public park across Lake Street from their site.