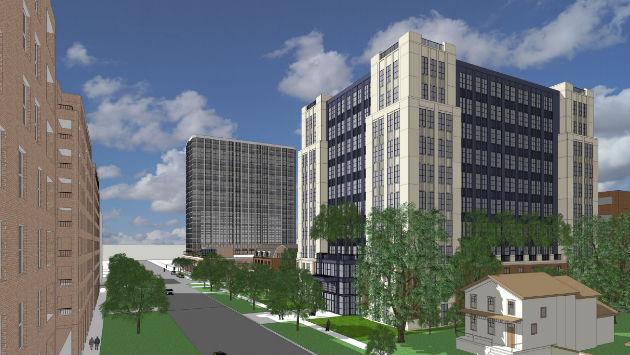 Plans for a new office building to be constructed on a city-owned downtown parking lot are once again scheduled for a final vote by Evanston aldermen tonight.

A vote that had been expected Feb. 25 was postponed after Alderman Don Wilson, 4th Ward asked for a modification to the agreement for sale of the property to the developer so that ownership would revert to the city if the project isn’t completed.

That change is included in the packet of materials for tonight’s meeeting, along with an updated list of owners of the development firm that Wilson also had requested.

Neighbors of the project site at 1714-1720 Chicago Ave. have signed a petition opposing the rezoning required for the development, so it will require a favorable vote of seven of the nine aldermen to approve the plans.

Until Feb. 11 the developers had been seeking a 13-story building with 120 parking spaces on four parking levels.

In the face of continued criticism about the reduction in available daytime public parking that plan included — with just one floor of the parking available to the public during office hours — Alderman Judy Fiske on Jan. 28 suggested the height reduction.

The plan the developers came back with called for having all of the parking in the building open to the public, with the developers to lease spaces in the city’s three downtown parking garages to provide parking for the new building’s office tenants.

Fiske, who frequently has resisted other development plans, has argued that adding the several hundred new downtown office jobs the new building could bring is essential to the health of downtown’s retail merchant community.

Under the proposal the developers will also pay the city $4 million to gain ownership of the site.