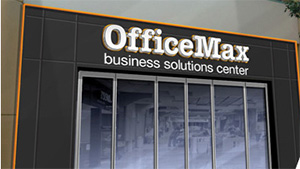 OfficeMax, known for its office supply superstores, plans to open a new, small-format store concept in downtown Evanston by the end of the year.

Word of the Evanston plans was first reported by Chicago Business in a story about Tuesday's opening of a similar small-format store in Chicago's Streeterville neighborhood.

An OfficeMax spokesmen told Evanston Now this afternoon that the new Evanston store will be located at 1612 Sherman Ave. That's in the Sherman Plaza development and is the former location of a Pier 1 store.

Office supply retailers have faced challenges for years in competing with e-commerce companies like Amazon and big-box stores that often offer similar products for less.

Company officials say the new small-store format is designed to put more focus on services and less on products. It will offer computer maintenance and repair, website design, custom print and document services, marketing support and tools to organize and manage workspaces, including cloud storage.

In a news release, OfficeMax CEO Ravi Saligram said the new store's "relationship-based model provides flexibility to tailor services, products and solutions to the unique needs of businesses at various stages of growth."

The new 3,900 square foot store is about one-fifth the size of the typical OfficeMax location.

Naperville-based OfficeMax, the nation's third-largest office supply chain, already has a superstore at 2225 Howard St. in the Evanston Center development.

It and Boca Raton, Fla.-based OfficeDepot are in the midst of a planned merger, which they claim will result in roughly $500 million a year in savings once it's completed.

OfficeDepot has a large free-standing store at the opposite end of Evanston at 2722 Green Bay Road.

Evanston City Manager Wally Bobkiewicz says it's too early to tell whether either of those stores might be shuttered as a result of the merger, but "we're very happy they've chosen Evanston for the new store concept."