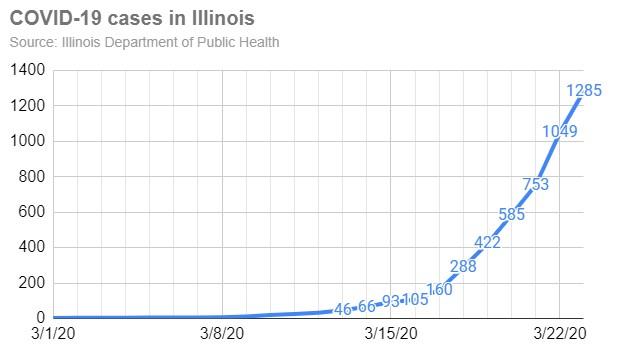 After announcing another 236 new COVID-19 cases in Illinois this afternoon, the state’s health director said it may take two to four weeks to tell whether the governor’s stay at home order is working to bend the curve and slow the rate of increase in cases of the sometimes deadly disease.

Illinois Department of Public Health Director Dr. Ngozi Ezike said that since the disease has a 14-day incubation period, it would take a minimum of one incubation period and perhaps two to tell whether social distancing efforts are actually slowing its spread.

“We’re in this for the long haul,” she added.

Six more confirmed cases were reported in Evanston today, bringing the total to 36 residents known to be infected, or 0.048% of the city’s population.

That’s a much higher confirmed infection rate than in the City of Chicago or the state as a whole.

At his news conference this afternoon, Gov. J.B. Pritzker praised efforts of Illinois Manufacturers’ Association and the Illinois Bioltechnology Innovation Organization to respond to the crisis by producing more essential supplies. (More about that from Chicago Business.)

He also praised the Illinois National Guard for its efforts to distribute supplies and assess how quickly shuttered hospitals could be reopened to house additional patients.

And Pritzker said that while the federal government has been slow to respond to the state’s needs for resources, he had an ecouraging call with President Trump earlier today and was hopeful there’ll be more cooperation in the future.