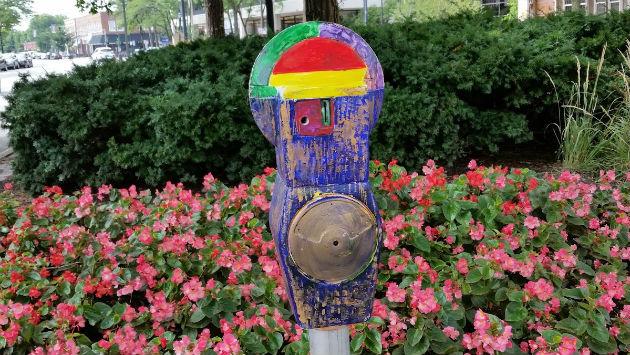 Some retired parking meters are being given a new life in Evanston as "donation stations" aimed at helping the homeless.

Downtown Evanston Executive Director Annie Coakley says it's part of an initiative to raise awareness about homelessness and panhandling.

Thirteen meters were turned into works of art by participants in the EvanstonMade Kids Fair earlier this summer and were installed this morning around downtown.

Coakley says Downtown Evanston is organizing a campaign to help the homeless find meals, showers and shelter while also encouraging people to put their spare change in one of the donation stations rather than in a panhandler's cup.

She says all change collected at the donation stations will be given to Evanston-based groups like Connections for the Homeless that provide services and resources to people who end up on the street.

“By redirecting resources to organizations that are in a better position to provide these much-needed services we hope to maximize their impact," Coakley, says . “Connections for the Homeless, like so many health and human service non-profit organizations, needs year-long fundraising support, we thought this might help, and the meters add a little art downtown as well.”

In addition, Downtown Evanston has developed two brochures that will be available throughout Evanston. The first is a list of resources in Evanston –for shelter, meals, job assistance and other services —  to distribute to people asking for change. The second is a handout with an overview of panhandling and other ways to get involved to help address homelessness here.

The meters are installed in planters and landscaped areas in the 600 and 700 blocks of Davis Street, the 700 blocks of Church and Clark streets, the 1500 and 1700 blocks of Sherman Avenue and the 1600 Orrington Avenue.