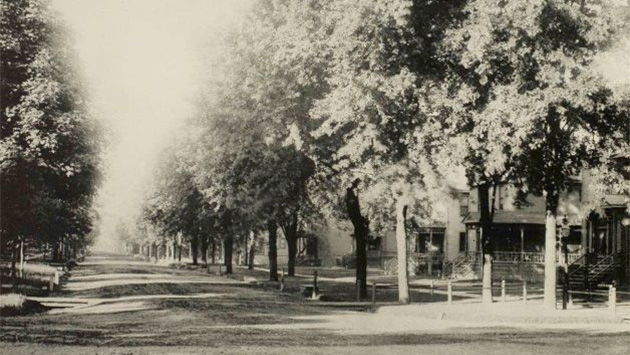 A new exhibit on the Northwestern University campus provides a high-tech view of 19th-century Evanston.

A collection of images captured by photographer Alexandler Hesler is being displayed on plazma screens mounted on the walls of the corridor between the unversity's main and Deering libraries.

Hesler (1823–1895), one of the most prominent regional photographers of his era, spent most of his career in the Chicago area.

Among his best known works are portraits of Abraham Lincoln and a panoramic view of Chicago taken in 1858 from the top of the city's courthouse.

In Evanston, where he had a home and studio, Hesler focused on portraiture, but also produced widely admired landscape photographs. His volume of photographs of Evanston buildings and streetscapes, Photographic Views of Picturesque Evanston, was published in 1887.

The exhibit in the Deering corridor celebrates Evanston's 150th anniversary with a selection of 40 images from Picturesque Evanston.

Each of the screens highlights an aspect of Evanston's past—gracious homes, tree-lined streets, school and church buildings, and the young Northwestern campus.

Many of the buildings in the photographs are now gone (remaining structures include University Hall, the Frances Willard House, and the Methodist Church) and many of the leafy street-corners are now busy commercial sites.

But thanks to Hesler's photography and the magic of technology, a slice of Evanston's history is vividly brought back to life.

The exhibit was curated by Janet Olson and the staff of the Northwestern University Archives; images were digitized by the Library's Digital Collections Department; and the installation was done by the Library Technology Department.

University Archives holds a copy of Picturesque Evanston and over 150 photographic prints made by Hesler during the 1870s–80s, including portraits of NU faculty and students; and photographs of buildings and student groups.

The Evanston History Center has additional Hesler photographs and biographical materials, including an annotated volume of Picturesque Evanston.

Top: An Alexander Hesler photo of Chicago Avenue in Evanston circa 1887 looking south from the Northwestern University campus gate.