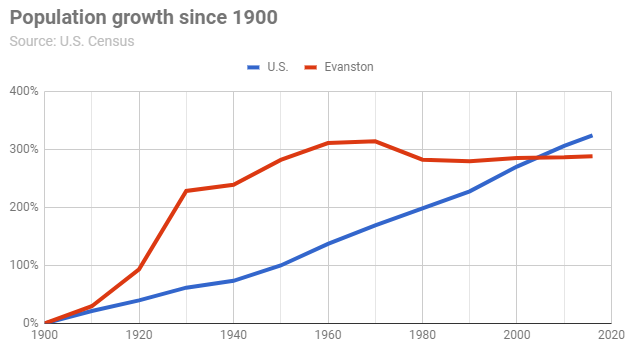 Evanston prides itself on being a welcoming community and a desirable place to live. But population trends raise doubts about those claims.

The chart above shows that early last century people thought Evanston was very desirable, and whatever doubts some existing residents may have had about the influx, on balance the city welcomed, or at least accommodated, growth here that was much faster than the national average.

Meanwhile the nation’s population has continued to grow steadly, so much so that Evanston now lags the nation for total growth since 1900. 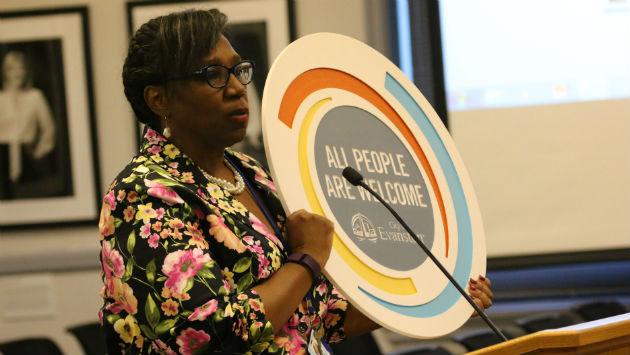 Evanston has officially proclaimed itself a “welcoming city” — even for illegal immigrants.

And the city routinely touts studies that claim Evanston is a desirable place to live.

But growth sufficient to confirm that both those claims are true isn’t happening.

Developers propose new housing — whether high-rises downtown or low- to mid-rise developments in the neighborhoods — and opponents shout their opposition. Some projects get downsized. Others are killed completely.

Meanwhile a lack of housing supply and a lack of undeveloped land push up prices, making the community less desirable — except for those for whom money is no object.

The net result is that Evanston can “welcome” a smaller share of the nation’s population each year.

Can Evanston can be both desirable and welcoming without accommodating a fair share of the nation’s growing population?

What do you think? How much growth does Evanston need to be both welcoming and desirable?