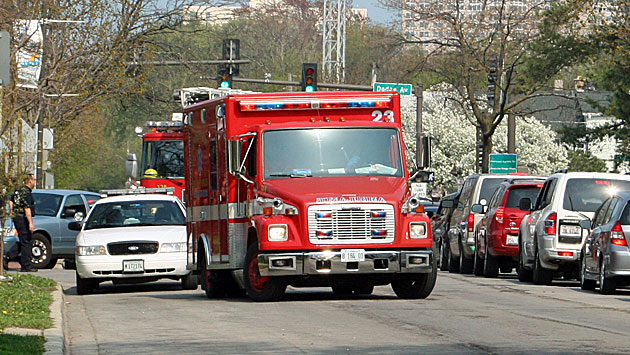 One man was transported by ambulance to Evanston Hospital and four others were in police custody this afternoon after a fight broke out near Evanston Township High School around 4 p.m.

The injured man, believed to be 21-years-old, reportedly got into a scuffle with the other four near the intersection of Church Street and Brown Avenue, just across the street from the school.

The four alleged assailants fled west a block onto Hovland Court and then north to where police were already on patrol on Hovland in the wake of recent disturbances, and that's where the four reportedly were taken into custody.

The victim reportedly suffered facial injuries. No further word was immediately available about his condition.

Above: An ambulance prepares to transport the victim from the intersection of Church Street and Brown Avenue.

Update 9:15 a.m. Wednesday: Police say no charges have been filed in the incident because none of the parties involved were willing to provide sufficient information about it.