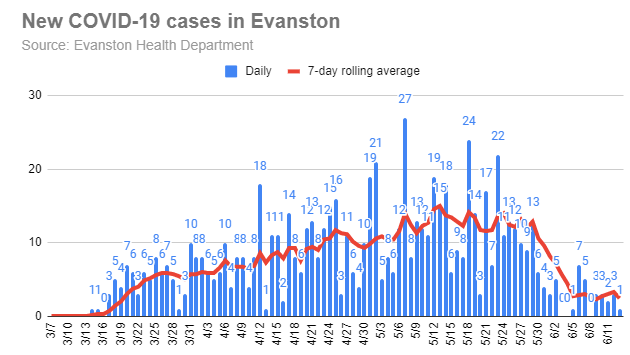 Evanston health officials reported one new COVID-19 case today and no additional deaths, but statewide there were 673 new cases and 29 more deaths.

The Illinois Department of Public Health reported four more cases in Evanston with 139 additional tests conducted for a positive test rate of 2.9%

The city’s case count now lags the state’s by a bit, with Evanston reporting 753 cases here, while the state says there’ve been 758. Evanston has reported a total of 62 deaths of residents from the disease.

The IDPH reported results of 21,844 tests for the disease today with a 3.1% positive rate. The seven-day average positive rate now stands at 3.4%.

The state now has performed nearly 1.17 million tests for the disease since the pandemic began.

All regions of the state continue to remain on track to move to the next phase of the Restore Illinois reopening plan late this month.